It’s been a while since I’ve posted about Matt Powell, the budding hate-preacher who has said the government should execute gay people because the Bible says so and that women should stop dressing like whores.

But yesterday, he delivered a sermon at the Sure Foundation Baptist Church in Vancouver, Washington about “THE ATHEIST RELIGION” — all caps because Christianity requires it — and it was so full of insanity that I needed to at least quote a few parts here… if for no other reason than letting people see what passes for fundamentalist “scholarship” these days.

I can’t address all of it. There’s too much ignorance and too many lies. I’m just trying to highlight the highlights. 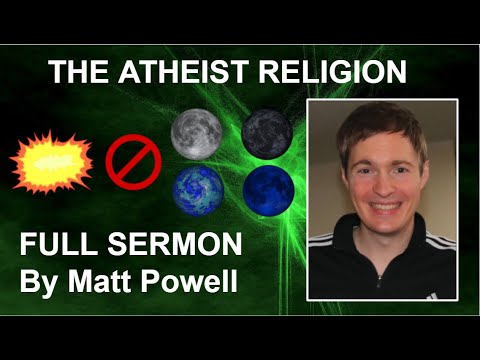 In fact, atheists tend to know more about the beliefs of various religions than believers themselves.

3:48: “… Is that why 99% of school shootings are done by atheists?… Yet Christians have never committed such an act?”

Whoa. Citation needed since he just pulled that number out of his ass. A couple shooters have done the equivalent of “liking” some atheist pages on Facebook, but I can’t recall anyone murdering people in the name of Dawkins. I’m not even saying Christians are to blame for mass shootings, either, though some have been linked to churches. The sort of people who commit those crimes tend to be isolated and radicalized, well outside the scope of some generic atheist group or church.

He’s lying again because he’s Christian and the truth doesn’t matter to him.

Let’s just take suicide, for example. Depression is obviously a key factor. If you’re part of an organized group of any kind, and are part of some community that makes you happy, you’re less likely to want to end your own life. So naturally, victims of suicide aren’t regular churchgoers. But it would be utterly foolish to jump to the conclusion that atheism itself is a problem. Atheists who find communities they love (even outside of church) are no more at risk than anyone else.

5:20: “Evolution basically teaches that it all started with an explosion…”

No… The Big Bang and evolution are very different ideas. Powell doesn’t understand either one.

Evolution isn’t accurate because a court said so. Courts ruled that religious myths weren’t science and therefore had no place in science class. Like any theory, evolution is constantly open to scrutiny — do the research, write your paper, get it peer-reviewed, and let’s have at it. What Powell and other Creationists want is to be able to bypass all scrutiny and inject their mythology directly into students’ brains.

38:32: “… They say Creationism is where all the money is. No, it’s not. Every good Creation scientist that I’ve ever known has lost money coming into this… I could be a millionaire teaching evolution… I can learn to speak words a certain way or to say things how they wanted me to say them to make money…”

Uh… I think I can speak for every science teacher in the country when I say, “Where the hell are these jobs where you get millions of dollars for accepting evolution?”

And literally no one says Creationists are just doing it to cash in. I’ll freely admit Ken Ham isn’t promoting mythology for the paycheck. He makes more money than most for the material his ministry creates, sure, but he really, deeply believes that nonsense.

Okay. I can’t do more of this. It’s just an uneducated guy offering an hour-long rant against topics he knows nothing about. But he’s confident and loud, which means there will always be a church audience for him somewhere.

But what else would you expect from a guy who thinks all atheists are Coke-drinking video game addicts?