The mayor of Monterrey, Mexico, Margarita Arellanes Cervantes, recently spoke at an event called “Monterrey Prays” (organized by a group called the Pastors Alliance) and gave quite the sermon:

“I, Margarita Alicia Arellanes Cervantes, deliver the city of Monterrey, Nuevo León to our Lord Jesus Christ. For his kingdom of peace and blessings to be established, I open the doors of this city to God as the maximum authority.“
The mayor said that without the presence and help of Jesus Christ there cannot be real success; “If the Lord doesn’t build the house, the ones who build it work in vain; if the Lord doesn’t care for the city, the watchers stand guard in vain.”
…
She mentioned that some people are offended and intolerant if God is spoken of in public, but tolerate and stay silent before hatred and evil…

You can see video of Cervantes’ speech (in Spanish) below: 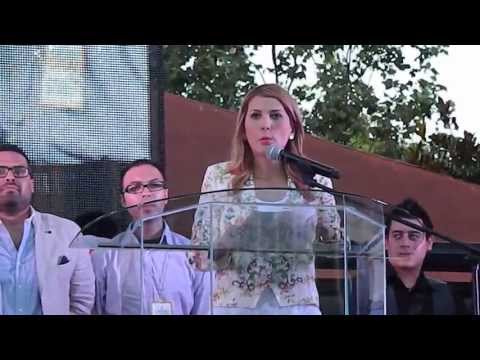 At the end of the speech (around the 6:40 mark), you can see the mayor giving the keys to the city to two children dressed in white (as stand-ins for Jesus).
After that video went viral in Mexico, Cervantes went on a local radio station to “explain” herself:

She said that the statements she made were “personal” and didn’t violate the Constitution.
“I believe that criticism should be reserved for things that do not have a good end or a noble cause… Who doesn’t want our city to do well?”

Of course, no one is criticizing her religious beliefs, only that she used her soapbox as mayor to promote her religious views. It wouldn’t be acceptable in America and it’s not acceptable in Monterrey, either.
(Thanks to Ager for the link and to Diego for help with translation!)