New Zealand just swore in its 40th Prime Minister, 37-year-old ex-Mormon-turned-Agnostic Jacinda Ardern.
Hours ago, she took her Oath of Allegiance (her oath of office) and Executive Council Oath.
And to the delight of non-religious people around the world, Ardern didn’t include the phrase “so help me God” at the end of either one. Nor did she place her hand on the Bible when she said them.
She also replaced the word “swear,” which could have religious overtones, with “solemnly, sincerely, and truly declare and affirm.” 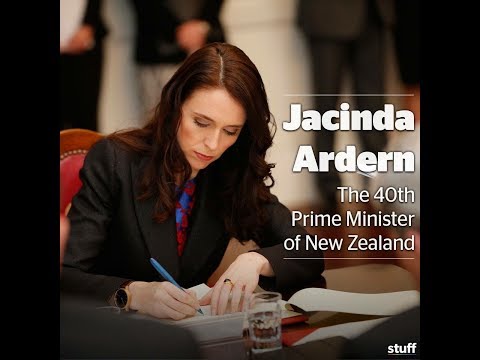 In addition to the secular words, there was no holy book in sight.

In total, 14 ministers and under-secretaries took the affirmation of allegiance, instead of swearing on the bible, including Ardern.

This is all obviously symbolic, but that shouldn’t be ignored. It’s good to see a government leader acknowledging that God’s not going to make things better; only the people can. New Zealand placed its trust in her, and it’s her job to do everything in her power to act in their best interests.
Some may see her avoidance of religion today as anti-religious. That would be the wrong interpretation of all this. Ardern isn’t ignoring God or throwing up middle fingers at Him. She’s making a promise to the people that they can count on her rather than some supernatural deity. It’s optimistic and realistic.
Now it’s time for her government to deliver on that confidence others have placed in them.
(Screenshot via 1NewsNow. Thanks to Brian for the link)