For a few short minutes today, televangelist Pat Robertson told the truth. On today’s episode of The 700 Club, he mocked Creationism and offered support for the fact that the Earth is billions of years old. 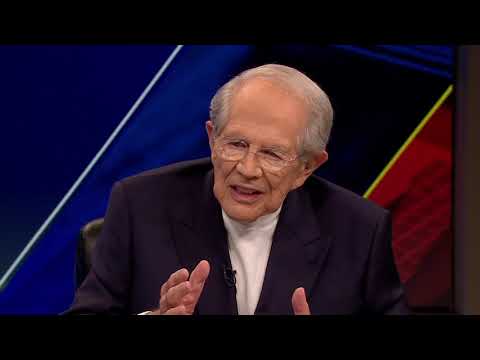 … I don’t think most Christians are stupid enough to believe that other… The other is the Ussher theory… if you added all the generations from Adam until the current time, and you say, “Alright, that adds up to 7,000. Okay. And so, therefore, the Earth’s only 7000 years old.” Well, that’s just nonsense.

I mean, there are just too many geological factors, too many things that have happened on our Earth. The Earth is about 14 billion years old, and there’s just no question about it.

You’ve got the dinosaurs. You’ve got all the things that have happened on this Earth. And there’s too much geology, I mean, it’s just established science. So the idea of having a 6-7,000-year Earth is just… It’s just… Any Christians who believe that, just, I’m telling you that, they aren’t very up on today’s…

I believe science! I mean, let’s face it! You know, God didn’t… This whole planet was set up for God’s purpose. The universe is tuned for life. But it didn’t get here in 6-7,000 years! It got here over… almost 14 billion years to get this Earth to where it is right now.

It’s not the first time he’s done this. Robertson, despite his long history of saying batshit crazy things, has always been weirdly pro-science when it comes to evolution.

He has said for years that Creationists’ belief in a young Earth “wasn’t inspired by the Lord,” that “you have to be deaf, dumb, and blind to think that this Earth that we live in only has 6,000 years of existence,” and that trying to rationalize a young Earth “just doesn’t compute.”

Sometimes the defense gets weird. Last year, he claimed that God didn’t create the Earth in six “literal 24-hour days” but rather six “galactic” days. Whatever that means. He reiterated that bizarre claim in April.

But before you get your hopes up, I should tell you that Robertson’s response here came only after a lengthy admiration-filled interview with a climate change denier.

Robertson doesn’t really accept science. But even gullible people can sometimes be tricked into accepting the truth.