Chris Stuckmann is a popular YouTube film critic with over 1.8 million subscribers. He’s the type of person whose videos you might watch immediately after seeing a film, because you really want to know what he thought of it.

That’s why it was a surprise to many of his fans when Stuckmann recently posted a very different kind of video entirely. Instead of a short review lasting about 10 minutes, he posted an hour-long explanation of why he walked away from the Jehovah’s Witnesses. 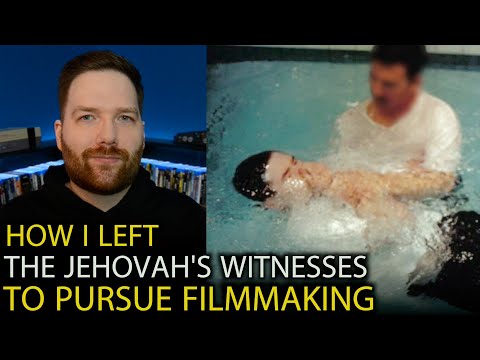 As he explains in the description, his goal is to discuss why he left and “how members of the religion I was raised in attempted to keep me from pursuing my goals.” A lot of it will be familiar to longtime readers of this site, but whenever a popular figure in one realm of the internet takes a deep dive into another, it means his audience comes along for the ride.

That may be the most important aspect of this video. It’s not just one person telling his religious journey. It’s that he’s explaining it, in depth, to an audience that may not otherwise seek out that information.

Stuckmann wrote in the comments:

Thank you all so much. The outreach since the interview went up has been overwhelming and has helped me heal. I can’t tell you how much it means to me that you’ve understood. I was anxious about discussing these things, but I’m so happy to learn that many ex-JWs watch the channel, and I truly hope this video reminds you that you’re not alone. Anyone out there afraid to come out about something, I see you. I support you. Thanks so much everyone.

Another commenter adds that his wife appreciated the video:

… She was raised in the same manner you were in Texas and the stories were exactly the same. It was so cathartic to hear that someone in a different region had the exact same experiences.

That person isn’t alone. Kudos to him for telling his story like this. It’s bound to help more people than he can imagine. He also says the proceeds from his video will go to RAINN (Rape, Abuse and Incest National Network), which works to end sexual violence in the U.S.

(Thanks to Jonathan for the link)