I thought Republicans had gotten the memo: When someone asks you about abortion, just pretend that you don’t speak-a the Eenglish and walk away.

Congressional candidate John Koster (R-WA) didn’t get the message. When asked over the weekend if he supported abortion in any cases, Koster said he would if the life of a woman was in danger… 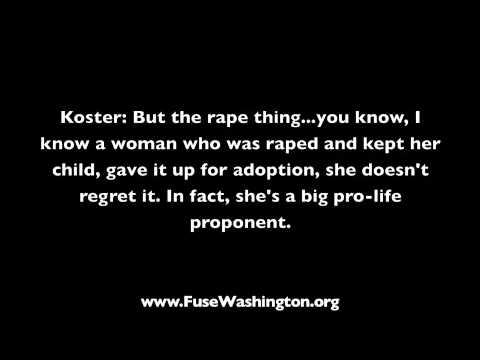 “Incest is so rare, I mean it’s so rare. But the rape thing, you know, I know a woman who was raped and kept the child, gave it up for adoption and doesn’t regret it. In fact, she’s a big pro-life proponent. But, on the rape thing it’s like, how does putting more violence onto a woman’s body and taking the life of an innocent child that’s a consequence of this crime, how does that make it better?”

[“Yeah, but she has to live with the consequences of that crime.”]

“Yeah, I know. I know crime has consequences, but how does it make it better by killing a child?”

There’s a guy filled with compassion and empathy for those victims: Yeah, they just went through a traumatic incident, but let’s force them to spend the next nine months carrying around a permanent reminder of their rape.

Of course, nobody’s “killing a child.” And if abortion is legal and sought out early enough, then it’s not even close to “violent.” Maybe if he knew something about the procedure and how it works, or he knew someone who needed to get one, he wouldn’t just be spouting out conservative talking points. Or maybe he thought the question was only referencing “legitimate rape.”

But this is a guy who thinks he should be in charge of making decisions about women’s healthcare. He’s not and he has no business going into public office.

If you want a way to make him pay for his comments, send some donations to his opponent, Suzan DelBene.

(Thanks to Sue for the link)