Vickers “Vic” Cunningham is hoping to become the Republican nominee for Dallas County commissioner in Texas, but his candidacy just hit a snag because he’s been exposed as a racist. 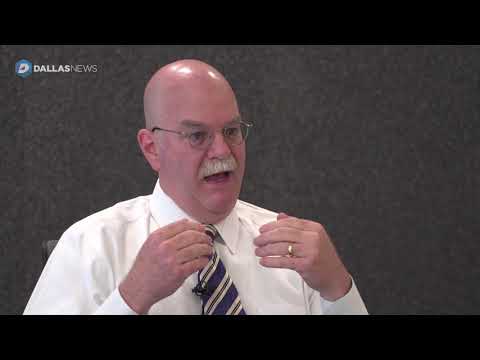 According to the Dallas Morning News, Cunningham’s brother Bill came to them with evidence of his racism. The most notorious example? Vic Cunningham’s living trust rewards his children for marrying someone who’s white, straight, and Christian.

He says there’s nothing racist about that. He’s just trying to adhere to biblical tradition.

“I strongly support traditional family values,” Cunningham said. “If you marry a person of the opposite sex that’s Caucasian, that’s Christian, they will get a distribution.”

His justification is that he’s not prohibiting his kids from marrying outside their race or religion. They just won’t get his money if they do. (Presumably, they won’t get his respect or love after that, either.)

There are other examples of his racism, too:

Bill Cunningham brought the allegations to The News Monday, shortly after he said Vic Cunningham arrived at his home and threatened him and his husband, who is black, and referred to his husband repeatedly as “your boy.”

Amanda Tackett, a former D Magazine writer and friend of Bill Cunningham’s who worked on Vic Cunningham’s 2006 campaign for district attorney, said she heard the former judge repeatedly use the N-word to insult black people behind their backs. She said he described criminal cases involving black people as “T.N.D.s,” short for “Typical [N-word] Deals.”

“Did you see what [N-word] [District Attorney Craig] Watkins is doing, setting all those [N-words] free?” Tackett recalled him saying. “He’ll never lose an election because all the [N-words] want their baby daddy out of jail.”

What’s especially disturbing about this story (well, besides everything) is that Dallas County is made up mostly of minorities. The Morning News says “blacks and Hispanics [make] up a large portion of the population,” and Cunningham, as a former judge, sent many of them to prison, though he says race had nothing to do with that.

While he doesn’t use the Bible to justify his bigotry, it’s hardly surprising that his faith, under the guise of “tradition,” correlates with his racism. In 2011, a church in Kentucky voted to ban interracial couples from membership. In 2016, a landlord evicted a married interracial couple because, he said, his church “don’t allow that black and white shacking.” Bob Jones University famously banned interracial dating until the year 2000. Even Hollywood, once unofficially functioning under Catholic Church rules, wasn’t allowed to show interracial couples for a long time.

The GOP’s runoff election for this seat is on Tuesday.