The city of Prescott, Arizona appears to have an official religion: Christianity.

On December 1st, the City Council, Arizona Secretary of State, and students from the public schools all took part in a lighting ceremony in front of the Yavapai County Courthouse that involved telling the Christmas story, singing religious songs, and reading from the Bible (just watch the 3:45 mark below): 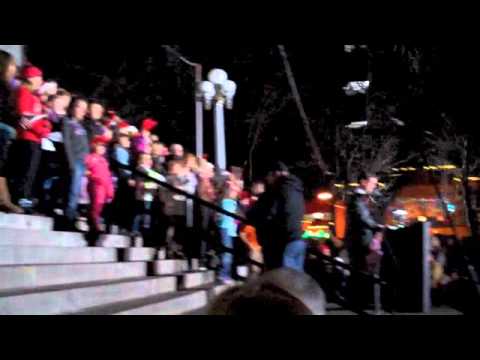 The Freedom From Religion Foundation is all over it (PDF):

The “story” [Arizona Secretary of State Ken] Bennett read was text from the book of Luke in the Christian bible, chapters one and two. The songs the children were asked to sing were overtly religious as well. “To address only one of the seven songs, “Joy to the World’s” lyrics include references to ‘the Lord,’ our ‘King,’ ‘Heaven,’ ‘the Savior reigns,’ ‘sins,’ ‘He rules the world through truth and grace’ and ‘His righteousness.’ According to the opening verse of the song the world is meant to feel joy because ‘The Lord is come! Let earth receive her King; let every heart prepare him room…’ This proclaims Jesus the King of the Earth and asks every listener to become Christian. In other words, the government stamp of approval is given to a song not only espousing Christianity, but also proselytizing for Christianity.”

This goes way beyond lighting a tree. With this many references to Christianity, how anyone could claim its a secular event — inclusive of all the citizens — is lost on me.

Arizona Governor Rose Perico Mofford designated Prescott as “Arizona’s Christmas City” in 1989, so this event has probably been going on for a while. They’ll say it’s tradition and that no one complained until this year, but time alone doesn’t right a wrong. Prescott has no business promoting one religion over another on government property, with elected officials in their public capacity advocating for Christianity.

The FFRF isn’t suing the city. Not yet. They’re just asking for written notice that future ceremonies stick to “secular songs and symbols like tree lighting, Santa, and reindeer” instead of Bible readings and Christian hymns.

For Prescott, this is an easy out and they should take it before taxpayers are on the hook for the officials’ negligence.