Don’t you love it when reporters ask someone a “gimme” question and the person misses it completely?
In Ardmore, Oklahoma, all City Commissioners meetings begin with a prayer. The Freedom From Religion Foundation is trying to put a stop to that.
That might be tough since it’s a completely non-denominational prayer, right?

When asked directly, “Do you pray in Jesus’ name?” City manager J.D. Spohn responded, “We always have. Yes, we do.”

“They’re praying to Jesus every time, and if that is what’s going on in Ardmore, they are outside the Constitutional bounds and are 100% violating the constitution,” Andrew Seidel, attorney from the Freedom From Religion Foundation asserted.

Watch the video below at the 0:41 mark. Spohn has no idea the reporter’s trying to lob him a softball and he whiffs at it: 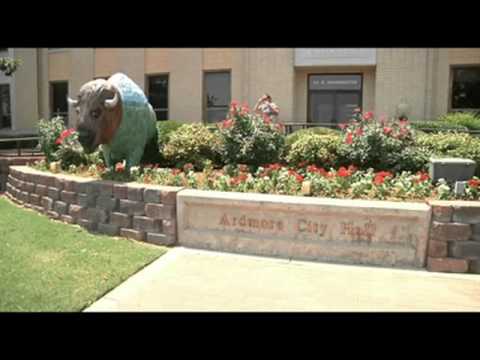 Then the mayor chimed in:

Surprise and disbelief is what mayor Bob Geurin felt.
“People from the outside shouldn’t be allowed to tell us what we do in Ardmore, Oklahoma,” he said.

Yes, they can, when you’re breaking the law.
Wait! They’re not the only ones guilty of putting their foot in their mouths:

“The prayer is said for the good of the commission and has been for years,” said vice mayor Sheryl Ellis. She added just because they received the fax [from FFRF], doesn’t mean the commission will immediately stop the prayer before meetings.

This should be an easy victory for FFRF. The city leaders have no idea what they’re doing wrong because they’ve never been challenged before. They’re going to have to change their ways or waste the taxpayers’ money on an unnecessary losing lawsuit.