Dr. Victor J. Stenger, the physicist and prolific author who wrote the 2007 New York Times bestseller God: The Failed Hypothesis, died late Wednesday night in Hawaii at the age of 79. Phylliss, his wife of more than 50 years, told me via email that the cause was “an aneurysm next to his heart.” He will be cremated on Saturday and a memorial will be held in Honolulu on Sunday.

Stenger had a somewhat lower profile than the other “New Atheist” authors, but his books, which he dished out year after year, offered up explanations of how the universe works and how it came to be, without resorting to supernatural explanations. God: The Failed Hypothesis was the first NYT bestseller in (secular publisher) Prometheus Books’ history. But even if you didn’t read his books, you may have heard his memorable phrase, “Science flies you to the moon. Religion flies you into buildings.”
As I write this, there’s a copy of his massive forthcoming book God and the Multiverse right next to me. I’ll post an excerpt soon, but it tackles many of the biggest questions we can ever think about, such as whether the universe has a beginning, the possibility of a multiverse, and the parameters needed for life on other planets. That’s the sort of thinker he was.
I’ve reached out to those who knew him for comments.
Below are some clips of Stenger in action, in a debate against Christian apologist William Lane Craig, on an episode of The Atheist Experience, and on a 2009 panel discussion for the Center For Inquiry alongside Richard Dawkins, Neil deGrasse Tyson, and Ann Druyan (moderated by D.J. Grothe): 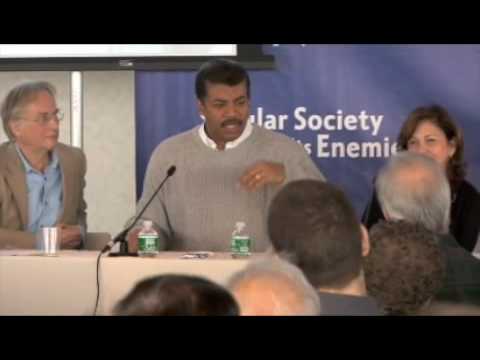 Grothe offered this personal statement to me in reaction to Stenger’s death:

Vic was an unassuming physicist and teacher who took on the challenge taking science out of the classroom and applied it to some of our most sacred cows, from psychics and New Age belief to Intelligent Design creationism. Most important I think was his fearless work showing how science actually disproves God, rather than just saying as other scientists did that science “had no need of that hypothesis.” But what I’ll remember most is his kindness: he wasn’t just about proving believers wrong, but about educating them, helping them see what is right, because he wanted to help those who believed harmful nonsense. It’s a sad loss, and he’ll be missed.

Ron Lindsay sent this statement on behalf of the Center For Inquiry:

With Vic Stenger’s death, the secular and skeptic communities have lost an articulate, knowledgeable, and relentless defender of the naturalistic, scientific worldview. Vic’s intellectual output was prodigious, especially in the last decade, when he turned out book after book hammering away at fallacious arguments for God’s existence, such as the notorious “fine-tuning” argument. Vic’s background as a physicist made him a formidable advocate for naturalism: he could quickly spot flaws in his opponent’s arguments and then specify precisely where his opponent had erred.
Vic had a long association with the Center for Inquiry family of organizations. He was a fellow of both the Center for Inquiry and the Committee for Skeptical Inquiry; he was also a frequent contributor to our magazines, Free Inquiry and Skeptical Inquirer, and spoke at many of our conferences.
One thing I liked about Vic was his lack of pretense and posturing. He didn’t trim his arguments — or his beard — to please others. He was interested in determining the truth. Period. What others thought of his occasionally rumpled look or his refusal to soft-pedal his arguments was a matter of indifference to him.
We’ll miss both his intellect and his intellectual integrity.

Peter Boghossian, author of A Manual for Creating Atheists, knew him personally and sent this along:

Victor Stenger’s death is a devastating loss and a blow to the advancement of reason and science. Vic was a friend and an inspiration. He was kind, funny, and unassuming. He was the sort of person we should all aspire to become — generous, thoughtful, down to earth, humble, and sincere.
I used to joke with Vic that hanging out with him was like dog hours — seven to one — he’d give me more to think about in one hour than seven hours of anything else I could possibly do. He will be missed beyond measure.

John W. Loftus, author of Why I Became an Atheist, wrote this:

I was shocked and dismayed at the death of my friend Vic. I was an admirer of his work and we collaborated together on some book projects. He was more than willing to answer my email questions and he sought out advice from noteworthy people on something he was writing, or for an upcoming debate he faced. A few times he sent out emails to multiple recipients where we all exchanged ideas on an issue.
Vic was an indefatigably passionate and prolific laborer on behalf of science, publishing more on the topic of science and religion in the last couple of decades than probably anyone else, including his NY Times bestseller, “God: The Failed Hypothesis.” I have wanted to edit a future anthology based on this book of his and Vic had already sent me his chapter titled, “Christianity and Cosmology.” I plan on using it when I do, or in some other venue. It might just be his last work, so readers will have at least one more chance to hear him speak from the grave.
He will be greatly missed but his body of work will continue to speak for several decades and more. The world is a much better place because he lived.

Jonathan Kurtz, Publisher, Prometheus Books, says, “Victor Stenger was a visionary thinker. He had the rare ability to write for the academic reader as well as the layman. He was the ultimate professional and a close friend of Prometheus, with a relationship going back many years. We will miss him greatly.”
…
“The books Victor authored leave a rich intellectual legacy,” says Steven L. Mitchell, editor in chief, Prometheus Books. “His works broaden the public’s knowledge about science and the thoughtful method it uses to explore claims of all stripes in an objective, rational way that will ultimately lead to answers grounded in the best available evidence rather than baseless assertions, unfounded conjecture, or blind faith.”

More statements will be coming soon.
(Image via Wikipedia)