Anthony Magnabosco has long been an advocate for “street epistemology,” which is all about getting to the bottom of how people think by questioning the way they arrive at those conclusions. Usually, when I post his videos, they involve him asking willing strangers questions about how they arrived at their religious views.

But recently, Anthony ran into a couple of guys in Texas, and he learned that one of them believed in the “law of attraction.” That’s the irrational idea (popularized in The Secret) that if you believe something wholeheartedly, it will come true.

Instead of questioning that guy himself, Anthony tried enlisting the help of his more skeptical friend. Watch this video, and watch how they ask a couple of simple questions that really make the believer rethink his entire worldview. 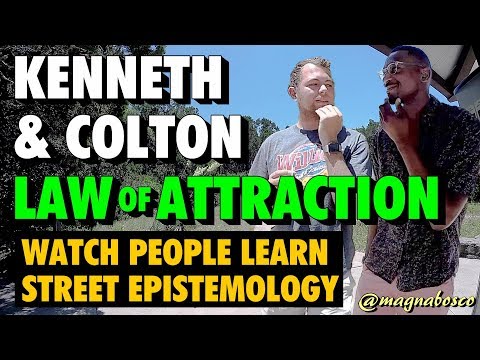 There’s no antagonism. There’s no anger. There’s no victory dance. It’s just a polite, effective way of getting the believer to realize the errors in how he came to his beliefs. We could all learn something from this technique.