***Update***: The video is back up and the strike against Skylar has been removed. Success!

Back in May, a young preacher named Matt Powell sat for an interview with atheist YouTuber Skylar Fiction. Powell had been mocked online for saying things like atheists were Coke-drinking video game addicts and scientists were hiding the truth about the Sun and moon, so this was his opportunity to clear the air.

Most notably, during the interview, he said to Skylar that the government should execute gay people. While that rhetoric isn’t out of the ordinary for some Christian extremists, it was still frightening to hear from the mouth of a 22-year-old.

… as far as homosexuality goes, you know, I believe the Bible puts the death penalty on it. I believe it’s disgusting. And incidentally, every scientific test has come back and said that homosexuals are 50 more times likely to get AIDS… we got this AIDS thing spreading… it’s a fact that this is the case.

Skylar even gave him a chance to walk back on what he said. Did he seriously think gay people should be killed?!

Powell doubled down on his beliefs. 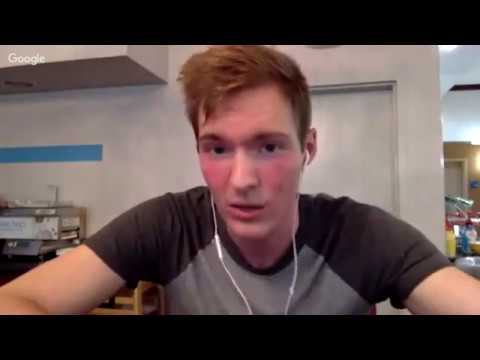 SKYLAR: … you don’t believe that gay people should be stoned to death, do you?

POWELL: I believe the Bible puts the death penalty on it. Obviously, not by me or anybody in a regular society, obviously. I believe it’s the government’s job to execute criminals. I believe that the Bible says clearly that homosexuality is a criminal crime. It’s a crime. It’s one of the worst crimes ever.

SKYLAR: … Is that what you’re advocating for? That our government should stone gays to death to execute them?

POWELL: By whatever means they execute people. And obviously, I believe in humane, you know, putting to death.

SKYLAR: I think that’s a contradiction, what you’re saying. You can’t use the word “humane” and then say you’re gonna kill people who are gay.

POWELL: Right, but the thing is, I mean, whatever our government says, as far as, like, for a death penalty, I think should go for them.

SKYLAR: Wait… but no… you’re saying you agree the government should create laws… in order to execute gay people. That’s what you’re telling me?

POWELL: That’s what the Bible says. I believe the Bible. I didn’t write the Bible.

I’m sure most of you tried to click on the video to watch that exchange… but you can’t. YouTube took down the video, citing hate speech. Skylar told me it was a strike on his channel, too, meaning he can’t livestream any more interviews for another three months. He’s on probation during that time.

In other words, YouTube punished him for exposing what a Christian extremist said. That is absolutely ridiculous. Skylar told me he appealed the decision, but YouTube didn’t overturn it. The strike remains.

He wrote in an email:

It’s sad that I can’t even ask people questions about what they believe without getting flagged for promoting hate speech. This is obviously not what I was doing. I was showing the ignorance of Matt’s point of view and countering his positions. If people in this country are not aware that people like Matt exist they have no opportunity to [challenge] their ideas.

He’s right about that. It’s not like Powell said the hateful things and Skylar let it slide. He pushed back! But it didn’t matter to YouTube.

Sky Palma explained on DeadState that an algorithm may be to blame, though it’s troubling that even an appeal, presumably to a human, didn’t work.

In its crackdown on misinformation and hate speech from October to December of last year, YouTube removed 8.3 million videos, 6.6 million of which were flagged by an algorithm. According to [TechRadar], it’s the public “that is doing much of the job YouTube should be doing, acting as moderators of the site by flagging content where necessary.” This dynamic invariably gets innocent people like Skylar flagged, sometimes with little to no recourse.

As he says, it’s possible well-meaning viewers flagged the interview as hate speech, even though Skylar did nothing wrong, and YouTube nabbed the wrong guy. But there should be a system in place to clear up the false positives.

Just last year, for example, a reporter for VICE interviewed the people behind the white supremacist march in Charlottesville. It was an incredible documentary that offered insight into the other side. YouTube could easily call that hate speech and take it down for the same reason — but unlike VICE, Skylar isn’t a giant media company with ways to push back.

It’s irresponsible of YouTube to allow this punishment to stand. If anyone has any contacts there, please tell them to fix this.