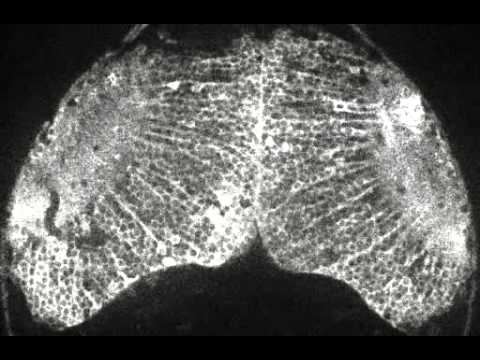 So you might well have caught this on various science websites, but the thoughts of a fish, a zebrafish, have been caught on camera. As Gizmodo report:

A team of Japanese researchers has achieved something incredible: they’ve captured, for the first time ever, a movie which shows how thoughts form in the brain.

OK, so it’s a thought forming in the brain of a zebrafish. And OK, its the fish’s reaction to seeing food, so it’s probably along the lines of “HUNGRY!”. But we shouldn’t play this down: this is a fundamental leap forward in our understanding of how brains work.

The researchers used a new technique to record the footage: a super-sensitive fluorescent probe that detects neuron activity. That lets us see neurons glowing when they’re active—and the cascade of light you see in this video, first published in Current Biology, is the neuronal response of a zebrafish responding to the presence of its prey. In other words, you’re seeing what the fish thinks when it sees its lunch.

Clearly zebrafish aren’t the brainiest creatures in the world, but that’s why the researchers from Japan’s National Institute of Genetics are now working out how to use the technique in other creatures—and get a better insight into how our brains really work.

What is interesting to think about here is whether this supports any position in the discipline of the Philosophy of Mind. And I don;t think it does. The main theories centre around dualism and the different sorts. The theories are, broadly speaking, as follows:

1) monism. I will not go into the different types of monism here – there are many. Briefly, though, one somehow defines mental states within a physical framework; that there is only one sort of state.

3) property dualism. This is that there is only one substance, but that there can be 2 different properties associated – physical and mental. This category can be defined as including other popular frameworks, such as epiphenonemonalism (that the mental supervenes on the physical, consciousness depends on brain); non-reductive physicalism (there are simply non-reducible properties to physical matter); emergentism (that when matter is organised into certain networks, mental states arise)

As far as I can tell, this finding supports no thesis in any clear manner. That consciousness either relies on, is, or is reflected within the brain is a given. And this is what we see – the brain is doing something. And we knew this already, the only difference being that we can see this in a visual manner. What we are seeing is a physical phenomenon.

Sadly, it neither proves nor disproves any particular theory of mind.