Abiogenesis and wondering how life started for the very first time here on Earth, is endlessly fascinating. Believers prefer to plug the hole of ignorance with the ever-useful GodPutty™. GodPutty™ plugs any holes in a way that leaves you never wanting for answers again. It’s the perfect antidote for scientific curiosity and inquiry.

Believers sit somewhere on the spectrum that goes from literal and historical Adam and Eve all the way to naturalistic explanations for abiogenesis such as life starting at hydrothermal vents or similar, except believers finish their spectrum at the point “God designed a mechanism for ‘naturalistic’ abiogenesis”, because God still needs to be the ultimate designer and creator, right?

The naturalistic end of the spectrum has a whole host of interesting options from aliens did it (AlienPutty™) to hydrothermal vents, from primordial soups to Late Heavy Bombardments and suchlike.

Most of the ideas revolve around the principle of emergence (the Wikipedia “Abiogenesis” article includes 33 uses of the word emerge and its derivatives).  Essentially, things get into networks and particular arrangements that are sufficient for life to begin. This comment (I sadly can’t remember who it was from, but was written on one of my threads over the last year or so – let me know if it was you!) nicely sums it all up for me:

When a system possesses properties that are more complex than just the sum of its parts, we call that an “emergent property.” Life is, therefore, an emergent property of matter and energy that are organized in a particular way. The atoms that constitute a living organism are no different from the atoms of non-living matter. It is their organization, under the direction of DNA, and the use of energy to keep them organized that distinguishes living from non-living matter.

This is key. Believers look at life and think it is so “out there”, so marvellous, such a category difference from non-life that they invoke God out of a mixture of the Argument from Incredulity and the Divine Fallacy. But the reality is that life emerges out of particular natural components in the same way a murmuration of starlings has patterns and changes in directional behaviour emerging out of the chaos of the natural components of starlings. Indeed, there are dozens of incredible photos of the murmurations making distinct shapes:

As I wrote in “Starlings, Televisions and Consciousness; The Emergent Sum Is Greater than Its Parts“:

I was watching the stunningly good Planet Earth II tonight and again saw the amazing flocks of starlings and their murmurations. Here is an idea of what they do (I couldn’t get the Planet Earth footage): 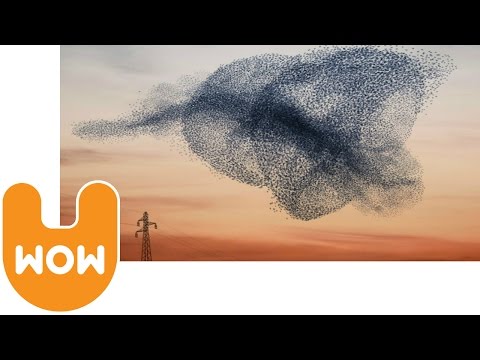 This got me thinking about emergent properties, when things are created that are greater than the sum of their parts. As wiki states:

Emergence is central in theories of integrative levels and of complex systems. For instance, the phenomenon of life as studied in biology is an emergent property of chemistry and psychological phenomena emerge from the neurobiological phenomena of living things.

In philosophy, theories that emphasize emergent properties have been called emergentism. Almost all accounts of emergentism include a form of epistemic or ontological irreducibility to the lower levels.

Indeed, watching those images on the TV is another great example of emergentism. Those little parts collected together, in their individual states, are merely randomly collected pieces of metal and plastic and so on. But arranged in a particular fashion, they produce something quite remarkable. Those moving images of the patterns created by those thousands of starlings, creating their mesmerising shapes, are themselves startling.

My brain is made up of a collection of neurons, of pieces of grey matter – physical human cells. Laid out in a row, they are merely a collection of cells. But arranged in a particular, complex fashion, they produce something greater. They produce something that can visualise and interpret those moving images of those mesmerising starling patterns.

And thus we have a three-step chain of emergence.

Whilst we may not fully comprehend the finer details of consciousness, like we do not quite understand the machinations of those birds, I think we can be pretty confident in not needing to invoke the supernatural, the unknown, in order to explain our first unknown. Emergence happens in nature, in human manufacture, and in the manufacture, by nature, of humans.

The point of this is that in the same way a lump of granite is made out of a particular arrangement of natural components, so too is a human or a rabbit. Okay, so these components might have greater variety, but the principle is the same. There is no real category difference (other than assigning life to one particular arrangement type like we might “pattern” etc.), or at least the category difference is somewhat less profound than many believers will have you think.