What a thoroughly depressing night for someone like me. The result itself was not particularly a surprise, but the scale was, and some of the Conservative gains were staggering. The devil, however, is in the details and there are certainly a big number of devils.

The Tories have a big majority that will allow them to easily deliver whatever they want in Parliament. The UK has moved from a hung parliament to a decisive majority for the Tories at the expense of Labour – in their heartlands.

For me, this election came down to six big areas:

This is what Labour will be trying to hang their disastrous performance on. But they have every right to. When you look at all of those properly strong Labour constituencies that have switched to Conservative – Bolsover, Dennis Skinner’s (the Beast of Bolsover) seat, Sedgewick, that Tony Blair won with a 25,000 majority, the Midlands and so on – these were strong Leave areas (in the EU referendum).

This is pretty much the only stat you need to know: 70% of Leave voters backed the Tories, and less than 50% of Remain voters backed Labour.

That, there, is the election in a nutshell.

Now, since Remain votes were split between 5 parties – Labour, Liberal Democrats, Greens, Plaid Cymru and the Scottish National Party – we have a shoo-in for Leave backing parties. There was a potential for the newly-formed Brexit Party to split the Leave vote and take away from the Tories. What actually seemed to happen is that they split the Labour vote. Many never-Tory Labour voters were far happier to vote for the BP and this allowed for comfortable Tory gains.

When you look at the correlation between Conservative gains and Leave voting, the pattern is clear. In strong Leave seats, Labour had a -28 seat swing, Conservatives +28…

I have really come to understand this over the last few years. I debated Brexit and the Media in public. The right wing has almost monopolised print media and their spending on online advertising has been voracious.  Five billionaires own 80% of UK media, new stats show:

Just 5 men – including 2 brothers – own 80% of the UK media, new statistics show. The 5 men also own not only the newspapers but also 80% of the TV stations, press agencies, book companies and cinemas in the UK.

When you look in detail, it gets worse. One analysis, last week, showed that 88% of Tory adverts online contained lies and falsehoods. 0% of Labour ads in the same analysis contained falsehoods.

I can tell you, from speaking to people around me (friends and family) that this works. I continually hear falsehoods repeated that take an awful lot of debunking thereafter. But the damage is done.

An interesting example is with the most mainstream of media – the BBC (Laura Kuenssberg) and ITV (Robert Peston) – who instinctively spread Tory lies concerning Health Secretary Matt Hancock’s visit to a hospital in Leeds to supposedly have his aide “punched in the face”. This debacle also followed on from the sinister use of the internet by Tories to spread lies about a boy sleeping on a hospital floor. Read “The Tories have punched truth in the face“.

Labour have simply been unable to overcome the daily inundation of bias and lies thrown at leader Jeremy Corbyn and Labour. The LSE has done a number of pieces of research to show that “Jeremy Corbyn is the most smeared politician in history“.

It looks like we are following the US into a post-truth era.

Scotland has, over the last decade, swung decisively away from Labour and into the hands of the Scottish National Party (SNP). The SNP now has some 48 seats in Scotland that they don’t look like ever losing to Labour. Simply put, Labour will struggle to get into power without Scottish representation.

This problem is compounded by the First Past the Post voting system, which hamstrings the left routinely (particularly Greens and Lib Dems, as well as the hard right). One comment to me was:

Results aside. Let’s do some number crunching comparing last night to 2017. LIBDEMS up almost 1 million votes – you lose a seat. CON 200,000 votes, that’ll be a 67 seat majority please. WTF. Broken. What’s worse, why would a party that this system works for change it…I despair.

We have a huge Tory seat increase that is simply not representative of the actual national vote share. Back in 2015, UKIP won 12% of the vote, secured 4 million votes, and returned a single MP. That is 49 MPs denied to UKIP by a voting system that is not fit for purpose The Greens, almost 2 million votes for 1 MP. The SNP? They needed only 56,00o votes per MP. UKIP got 3 times the vote than the SNP for 1 MP, and the SNP got 50 MPs.

This had particular impact for the Lib Dems, who increased their vote share and had a nett loss of 1 MP! This is all you need to know on proportional representation with regard to this election – MPs, vote share, votes:

The Greens and Lib Dems should have 91 MPs. These were huge Remain parties. They got 12 MPs. This should be the headline. The Tories get a thumping majority of seats with less than 44% of the vote.

This is going to sound elitist. Because it is. Because there simply aren’t enough people who understand politics in the electorate. I know this because I routinely talk to a huge amount of people who exhibit great political ignorance. I still remember, a few years back during David Cameron’s reign, when a degree-holding member of staff in the staffroom declared that she didn’t know who the Prime Minister was, nor who the ruling party were.

So many people I speak to simply don’t understand the left/right paradigm (which is itself potentially problematic), the idea of small vs big government and who backs and funds each party (and, therefore, who their policies will benefit) – and just politics in general.

Leave voters hate this claim, but I posit that this as certainly the case with the EU Referendum. I studied the EU at great length and publicly debated it but I still think I was too ignorant to make a properly informed decision on the matter. The same goes for national politics. Because people now vote as if it is a presidential election. They don’t like Corbyn because the media constantly tells them that he hangs out with terrorists and all sorts of other debunked myths.

This excerpt from a few years ago in Tory stronghold Guildford from the One Show sums it up: 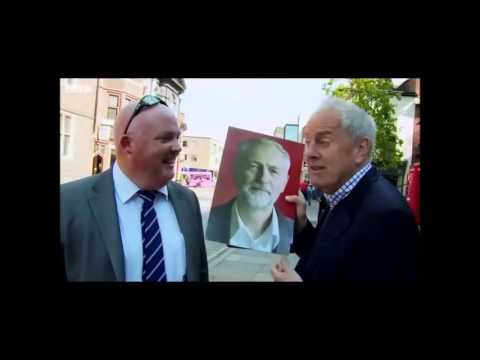 The voters loved the policies but when they found out they were from Corbyn, their reactions were telling. Honestly, that short video sums up the state of modern UK politics to a tee.

Back in 2015, the LSE looked into this (well worth a read), including:

Recently, a survey for the Royal Statistical Society and KCL gave a powerful impression of the extent of public ignorance over social affairs and politics, finding, among other things, that:

Meanwhile, it seems plausible that the probability of limited information and tight epistemic constraints are factored-in to the version of democracy practiced in the UK, where we defer to representatives for choice-making, effectively ‘outsourcing’ the costly business of political expertise to a specialised group. The ignorance and manipulations of the political class therefore rightly become the primary subjects of our scrutiny.

Political analysis, if it is to have meaning, should take the ignorance of democratic citizens seriously – but it should also probably take it as a non-negotiable feature of the way that democracies work in the era of mass voting publics.

A large swathe of the electorate has voted for parties and policies that they are pretty much ignorant of. I mean, how many people really read the manifestos? Seriously?

I thought this in 1997 after Blair’s landslide, when I was walking around my halls of residence to see all of these shouting and cheering students, and I wondered to myself whether any of them had actually read the main manifestos.

As the Washington Post stated of Brexit a few years ago:

Despite such caveats, we do in fact have more systematic evidence indicating that the result of the Brexit vote may have been significantly influenced by ignorance. Preelection survey data indicates that many voters were significantly misinformed about many of the issues at stake in the Brexit debate. And the direction of these errors largely favored the Leave option. On average, voters greatly overestimated the number of EU immigrants living in Britain and the amount of child welfare payments given to them by the British government, while greatly underestimating the extent of EU investment in the UK. Polls showed that both fear of immigration and economic concerns were among the top issues on voters’ minds. Widespread ignorance likely gave the Leave side a boost on both issues. Especially given the closeness of the vote (Leave prevailed by a narrow 52-48 margin), it is quite possible that the result would have gone the other way if the electorate had been better-informed.

I think political ignorance favours the right a fair bit because voters get swept up with dog-whistle, reactionary tropes and policies.  Fear finds a fertile breeding ground in the politically ignorant.

This might seem a bit leftfield, but it also feeds into the political ignorance point. The working class, union-member voters have always been exceptionally political. Trade union membership has fallen from a high of 13.2 million in 1979 to 6.2 million in 2015-2016. That is massively impactful. At the end of the day, Labour’s core voters are – now, think about the name here – workers and the working class. They are funded by the trade unions. So when the Tories are being funded to a greater and greater extent by billionaires and big, dark money corporates, Labour depends massively on trade unions. And with only less than half the trade union membership than in the 70s, and with manufacturing being decimated in the UK’s mature economy (and set to be further so with Brexit), Labour and the left are in trouble.

What happened in this election is that Labour membership and voters have shifted from the unionised working class to middle-class intellectuals. Yes, London looks safe for Labour, but in their working-class northern heartlands, they have lost. This started happening with Blair and New Labour where they courted the middle ground and appealed to the classic swing voter. Now, we see a very interesting demographic shift going on. As some commentators have said, Labour need to have a really long, hard look at themselves to work out who they are, and where they go.

Things don’t look good, going forward. And Brexit has a hell of a lot to answer for. But one thing I did say before the election is that if Labour did win, with some minority coalition, then they would have a strong chance of inheriting a poisoned chalice. I think the Tories will be up against it for a few reasons: