And the worst part about having PPMS is that there are no regular treatments available, at least not on the NHS.

The best way to explain the different forms of MS to the layman is with this picture below:

Basically, the most common forms of multiple sclerosis are the relapsing/remitting varieties. With these, you relapse into inflammation episodes where your body and mind are affected but these episodes then go into remission and you either return to the way you were or to a slightly worse state. These can be treated with what are known as disease-modifying drugs or DMDs. These drugs delay or put off subsequent relapses so that the gap between relapses is increased, hopefully substantially.

However, after some time, usually when a patient is older, relapsing/remitting multiple sclerosis enters a secondary phase. This secondary phase is progressive whereby the symptoms gradually progress into forms of greater disability without relapsing or remitting. The speed with which the patient deteriorates is highly variable.

Because God is a bastard, or the universe is uncaring, I have PPMS. With this version of MS, I have entered something akin to the secondary phase mentioned above. I bypass the relapsing/remitting phase and start off in the primary phase with progressive MS. Again, the speed that my condition will progress, both physically and cognitively, is unpredictable. I have to hope that, if I do all the right things as far as diet and supplements and this and that are concerned, I will be able to keep the progression if not at bay then slower than otherwise.

There is one treatment that is available to me and this is HSCT, or hematopoietic stem cell transplantation. As the MS Society describes it:

Results have shown that HSCT is most effective for people:

These results form the basis of European Guidelines that most clinics use to assess who is eligible for HSCT.

It will mainly include people with highly active relapsing MS who are still having relapses despite taking disease modifying therapies (DMTs).

If someone has progressive MS and still has active inflammation (either relapses or lesions on an MRI), HSCT may be able to stop or slow this.

But HSCT can’t regrow nerves or repair damaged myelin, so it can’t help those with advanced progressive MS who are no longer having relapses and don’t shown signs of inflammation on an MRI.

Researchers are working hard to find effective treatments for people with progressive MS.

This treatment was popularised on BBC News recently: 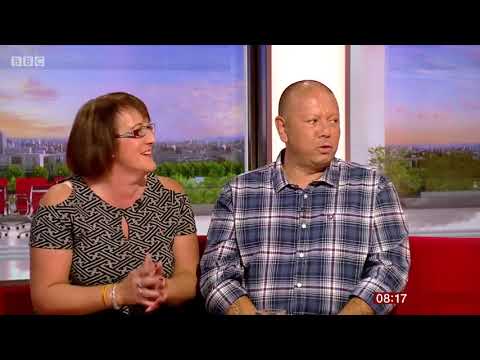 The treatment is available on the NHS, but only in London and only if you qualify under a number of criteria. Most people go for the treatment in Britain privately. The best place, it seems, to get it done is in Moscow as they have been doing it really well since 1999. I’m a member of many Facebook groups to do with this treatment so that I can gather as much information on it as possible. It is likely that I will, either on the NHS or privately (depending on finances), go down this route.

I’ve certainly declined a little both physically and cognitively since I last spoke to all about this. It’s what is to be expected. I might write something in the future on the psychology of dealing with a degenerative disease like this. I’m still working as a teacher but do wonder how long I will be able to sustain an incredibly stressful job when stress is one of the major contributing factors to MS.

As I’ve mentioned before, I will continue to write as much as I can and as often as I can. Again, if there are any readers out there who wish to contribute to this blog, please let me know as it will alleviate the burden!

Finally, it goes without saying that this is not a piece to garner sympathy but one to explain my situation for both interest and so that you understand if I occasionally miss the opportunity to make a couple of posts. As you so kindly often do, if you find typpos in my peaces, please let me no as quickly as possable. They creap in their due to my incredibly cumbersome tiping or speech to text that goes awrye.