Evangelical Christians get very excited whenever an A-list singer or Hollywood actor openly professes faith in Jesus, and last weekend that thrill came again when Chris Pratt (a.k.a. Andy Dwyer from Parks and Rec and Peter Quill from Guardians of the Galaxy) delivered a speech after receiving the Generation Award at the MTV Movie & TV Awards.
In the short space of his three minute speech, he hit the most important highlights of the evangelical Christian faith, namely that you suck and will never live up to what you are supposed to be, but that if you’ll only surrender your personal autonomy to someone else who is much better than you then you can be forgiven for how very much you suck. Granted, I’m paraphrasing.
Three things stuck out to me while I listened to his speech, which I’m including here (4:15). 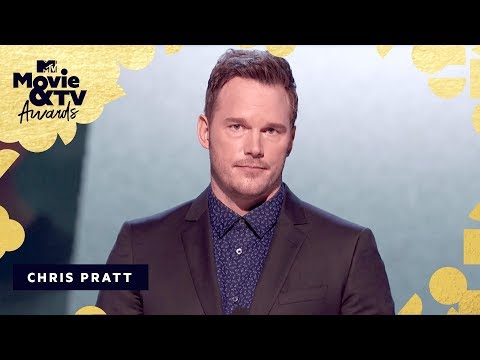 Anyone with five minutes of authentic youth group experience will recognize the sudden and dramatic tone reversals of a gospel sales pitch offered to a room full of hormonal teenagers. First you hype them up with abject silliness and then before they can catch their breath from laughing, you hit them over the head with a heavy, serious word about how very awful they are and how much they deserve to be punished just for being who they are.
If that sounds like it escalated quickly, it’s because it did. And it always does. But this is a time-honored formula with which anyone who grew up in evangelical Christian culture will be familiar.

To the uninitiated, Pratt’s speech probably seemed like a random brain dump of eccentric advice (he devotes an entire point to explaining at length the best way to poop at a party without unduly stinking up the bathroom), and the bizarre ritual appeared to visibly perplex fellow A-lister Olivia Munn (call me), who at that moment probably wonders if Pratt ever fully left behind his adolescence.
But perpetual adolescence is a common conceit in youth ministry. Acting like you’re still twelve is standard operating procedure in sharing faith with pubescent, malleable teens. It’s probably written down somewhere, but even if it’s not, I can assure you that it’s all a part of preparing your audience for the much more serious part that’s coming up.
After describing in great detail how to defecate without being detected, and while people are still scratching their heads, Pratt lowers the boom and gets to the real point of his deceptively unfocused screed:

People will tell you that you are perfect just the way that you are. You are not! You are imperfect. You always will be.
But there is a powerful force that designed you that way, and if you are willing to accept that, you will have grace. And grace is a gift. Like the freedom that we enjoy in this country, that grace was paid for with somebody else’s blood. Do not forget that. Don’t take that for granted.

So much for all those messages your parents and your teachers and your counselors have been trying to tell you so that you’ll stop talking down to yourself and hurting yourself, compulsively entertaining the self-loathing narratives we all learn to absorb as insecure teens. Pratt wants you to embrace the self-hatred and run with it. If you don’t do that, you won’t be as ready or willing to accept what he’s trying to offer you.
Related: “Anti-humanism: How Evangelicalism Taught Me the Art of Self-Loathing“
This was always the real point of his speech. Everything else was just setting up the moment so he wouldn’t appear to be overly obsessed with a dark timeline in which we all deserve to be tortured forever simply for being human beings. But that’s the timeline he occupies. He’s simply learned from watching preachers that you have to lighten the mood first before you hit them over the head with your real message.

Hiding Medicine in Some Hamburger

In the middle of his “Nine Rules for Living” Pratt dispenses advice which any animal lover will probably already know: If your four-legged friends don’t want the medicine that you know they need, you can simply slip it into something they’ll like and then they’ll eat it.

When giving a dog medicine, put the medicine in a little piece of hamburger, and they won’t even know they’re eating medicine.

This transparently prophetic comment signals to the rest of us the very thing he is trying to do with this speech. He has something he wants to give us, and he knows good and well we’re going to make the same face that Munn makes in the screenshot above.
The MTV Movie and Music Awards is an admittedly odd place to hear a sermonette from a perpetually juvenile Hollywood actor. So he buries his quite serious message inside a frivolous lump of levity in hopes that the young people in the room will swallow it before they realize what they’ve just ingested.
Again, this is a time-tested tradition which ex-vangelicals like me know all too well. That’s why none of this seems all that strange to us. We’re not so much bothered by the ritual as much as we are annoyed by the realization that, in this analogy, we are all the dogs and Pratt represents the “elder” in the room who is condescending to share his higher wisdom with the rest of us.
I seriously doubt he would accept this description. He’d probably be horrified by it and denounce the idea if anyone suggested it to his face. But that’s what you’re doing when you come at us with a sermon hidden behind a bit about pooping at parties. It’s a sales technique we know all too well. And like all sales pitches, some level of misdirection is involved…just like when you stand up to give an acceptance speech and you use it to preach at us.
Which leads me to my last point.

Pratt imported this brief moment of church into an MTV awards ceremony because he is a Christian. And not just any kind of Christian, but an evangelical one, which ultimately means “one who will tell you about what he believes whether you ask him to or not.” They don’t typically wait for an invitation because if they do, they’ll likely be waiting forever.
Someone who most legitimate scholars believe could not have been the apostle Peter once said:

Always be prepared to give an answer to everyone who asks you to give the reason for the hope that you have.

I remember spending a great deal of time preparing myself for just that moment, and I’ll be damned if it never happened once in twenty years of being a devout Christian. It happens in Christian movies all the time, of course. In movies produced by Pure Flix (the Christian answer to Netflix), someone often approaches the Jesus-loving protagonist to ask him or her to please share the gospel message with them.
But these movies exist (and sell out in theaters near me) in order to compensate for the fact that such a moment never actually comes in real life, no matter how devout or exemplary their love for Jesus may be. People generally don’t fall at their feet, asking for enlightenment, so evangelicals have to take that initiative upon themselves and just give it to us whether or not we’ve asked for it. Consent has never been a big thing in the Christian faith anyway.
Related: “Christianity Has a Major Boundary Problem“
Nevertheless, Pratt will be praised for playing youth minister to a room full of admirers who are nearly a decade younger than he is. I suppose he does show bravery in sharing his faith unbidden before a televised audience, and for that I should give him credit. I just wish the message he chose to share so bravely weren’t one of self-deprecation and dependence on the shedding of somebody’s blood.
At every phase of its development, this religion has always required the killing of something or someone. But the one always demanding death to appease his wrath loves you, so at least there’s that, right? It’s called “grace” because you deserve so much worse than you’re getting. As the National Review‘s David French (who also writes for Patheos) reminds us, this is an integral part of the “good news.”
Related: “The Dark Side of Grace“
Thanks but I’ll pass. I’ve already taken that medicine and it only made me sicker.
[Image Source: YouTube]
__________
If you’re new to Godless In Dixie, be sure to check out The Beginner’s Guide for 200+ links categorized topically on a single page.
And if you like what you read on Godless in Dixie, please consider sponsoring me on Patreon, or else you can give to help me travel to meet with groups all over the country. Every bit helps, and is greatly appreciated.