I kept my deconversion a secret for nearly four years, but after being “outed” against my will I decided to go ahead and own it. Soon after, I began thinking about starting a blog to unpack my thoughts about faith and skepticism out loud for the benefit of others, and that’s when I read on the Friendly Atheist that people were organizing an Interview an Atheist at Church Day. I wanted in.
[ iTunes | spreaker | youtube | pdf ]
To be honest, when I volunteered to be the atheist for whichever local pastor would be foolish enough to do something like this, I had very low expectations. No pastor in his right mind would invite an atheist to share the stage with him in front of the whole church, not in Mississippi. But I was wrong. A local Church of Christ minister stepped forward and accepted the challenge, and after meeting for lunch a couple of times to discuss what each of us wanted out of the experience, we set it up.

It went remarkably well. The minister was exceptionally welcoming and nonjudgmental for someone in the Church of Christ. I later learned that not only was he a transplant from up North, but he was also planning to relocate to another state within a matter of weeks. That explains his willingness to endure the strong opposition he got from others in leadership at his church.
What follows is an elaboration of the points I laid out during the interview explaining what are the most common things atheists like me wish Christians understood about us. It’s been several years now since I first scribbled these out, but I feel like the list still rings true. I’ll post a video of that portion of the longer conversation at the end of this article.

a. Eternal punishment for temporal actions doesn’t make sense. The punishment doesn’t fit the “crimes.”
b. There’s nothing to learn in Hell because you never get out. It’s punishment without a purpose.
c. There’s considerable confusion about the physicality of such a place. Are we talking bodies burning here? Do they keep regenerating so they can keep burning? It seems the Bible can’t make up its mind.
d. Jesus paid it all, they say. Except some of us will have to pay, too. And while it will take all eternity for us to pay for our 70 years of sins, Jesus paid for the sins of billions of people over a twelve hour period one Friday.
e. Don’t even get me started on Pascal’s wager. Here’s a short summary of what’s wrong with it.

11.) Not all of us are anti-theists.
This one got me into some hot water with other atheists. I still stand by my self-description, which is that I am not an anti-theist, I’m more of an anti-fundamentalist. I will add, however, that since the time that I did this interview I’ve seen enough to change my posture toward evangelical Christianity, becoming more antagonistic than I once was.
Because so many of my personal relationships are with evangelicals, I still care a great deal about trying to strike a balance between honesty and respect for our differences of belief. But some beliefs are just harmful, and I am learning the value of speaking up about those. So if I had this talk to do over again, I would have addressed the last point a bit differently, and perhaps would have made it sound less like I don’t think there’s value in what the public critics of religion are about.
With that in mind, here’s the shorter excerpt of the longer interview: 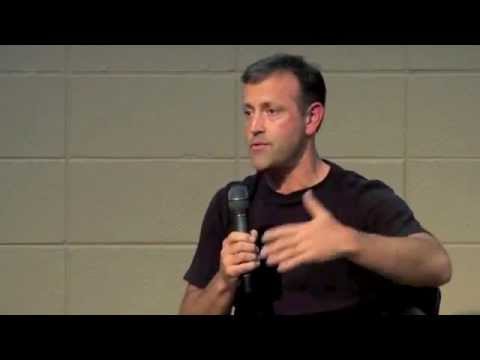 And if you’d like to see the whole interview in its entirety, you can view it here.
__________
If you’re new to Godless In Dixie, be sure to check out The Beginner’s Guide for 200+ links categorized topically on a single page.

And if you like what you read on Godless in Dixie, please consider sponsoring me on Patreon, or else you can give via Paypal to help me keep doing what I’m doing. Every bit helps, and is greatly appreciated.

Want to know the easiest way to help? Point your phone camera here and you’re all set!