February 2nd is upon us, which means it’s time once again to talk about one of my favorite movies of all time: Groundhog Day.
Few movies have stimulated as much philosophical and theological debate as this one has.  There’s so much that could be said—and already has been said—about this movie.  About a decade after the movie’s release, the Museum of Modern Art produced a retrospective movie series about “film and faith,” and they had good reason to choose this movie to lead the series.  After polling 35 leading critics of literature, religion, and film, they found that this one movie came up so many times that the critics were fighting over who would get to write about it in the catalog.
Like the Matrix trilogy (which I cover here), Groundhog Day is an audiovisual dissertation on philosophy disguised as cinematic entertainment.  Every year when Februrary 2nd rolls around, I have to pull this movie back out and watch it again because there are so many things about it that I love.  For example, who wouldn’t want a chance to get do-overs for all of their mistakes?  And how many times have I wished that I had all the time I need to read whatever I want to read, have all the conversations I want to have, learn to play an instrument, or learn a foreign language?  It has quite a few of my favorite movie lines as well.  But on a deeper level, Groundhog Day asks a question that aptly illustrates what it’s like to discover that you no longer believe in an afterlife:

What If There Were No Tomorrow?

This metaphorical question strikes at the heart of an ongoing debate between naturalists and supernaturalists everywhere.  What if there is no afterlife?  How should we then live?  What will order our priorities and guide our choices if “tomorrow” (i.e. life in the hereafter) were removed from the equation?
After spending a long miserable day in his least favorite place in the world, Phil Conners (superbly played by Bill Murray) wakes up the next morning only to discover that he has to relive the same day again in the exact same miserable place.  Then the next day it happens again.  And the next day, again.  And again, and again, and again.  It’s hard to say how many times he has to endure this torturous purgatory; estimates have ranged from a few weeks to thousands of years.  It doesn’t really matter because to someone truly immortal the passage of time becomes a meaningless construct.
Thankfully, Harold Ramis chose to leave out the reason for Phil’s temporal imprisonment (it was extra anyway, involving a curse pronounced by a jaded ex-girlfriend), and instead comically explored the many stages a person might go through upon learning that he can do practically anything he wanted.  If you were to let a man have whatever he wanted as many times as he wanted it, how might it change what he wants? 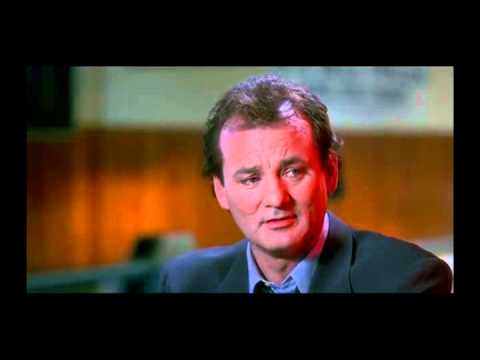 Upon realizing that he can do whatever he likes, and that there are no lasting consequences for his actions, Phil first embarks on a hedonistic thrill-seeking adventure.  He robs banks, evades cops, crashes cars, seduces women, and gorges himself on every unhealthy dish the local diner has to offer.  Since there’s no meaningful punishment, there’s nothing to stop him from doing as he pleases. But this only satisfies him for so long.  Eventually the novelty of it all wears off and he decides to set his sights a little higher.
The most interesting and attractive person in town is his producer, Rita (played by the beautiful Andie MacDowell), but she proves much more difficult to acquire.  Intelligent, sensitive, and beautiful, she needs someone much more altruistic and self-actualized than Phil to sweep her off her feet.  He tries but fails to win her affections and soon descends into a period of nihilistic despair.  He tries to take his own life a number of different ways, but he always wakes up again the next morning unscathed.  No matter how bleak the days get, life goes on.
This pushes Phil to reevaluate what would truly make him happy.  The sensual pleasures were fun for a while but people are complex, so they want more complicated things.  Phil starts to read interesting books, learns to play jazz piano, learns to ice sculpt, and teaches himself French.  His morning broadcast becomes more and more poetic as he begins to contemplate the deeper questions of human existence.  Before long, this self-absorbed weather diva learns to appreciate the company of people he previously thought were too far beneath him for his time and attention.
In time he learns that the enjoyment you receive from helping others satisfies something deeper than food, money, or sex could ever satisfy by themselves.  He learns the value of contributing to the lives of people around him, not because he would be rewarded the next day for his good behavior, but just because it’s the most enjoyable way he could envision spending this eternally recurring day.

People from a wide array of faiths and philosophies see their own worldview championed in this movie, so it’s no surprise that I would see my own in there as well.  It seems to me that Groundhog Day comically illustrates the evolution and maturation of humankind from its baser survival instincts to a more refined and species-advancing pursuit of mutual edification and self-actualization.  Without the rewards and punishments of a “tomorrow” that never seems to come, we human beings still find the motivation we need to pursue constructive goals which benefit everyone, not just ourselves.  No fear of rewards or punishment in the afterlife are required for such things.
Supernaturalist viewers of this film are quick to point out that without an expectation for a “tomorrow,” Phil immediately turns to selfish, exploitative pleasure seeking.  “That’s what happens,” they warn us, “when you believe this life is the only one there is. You will have no reason to do right.”  But even when I was a Christian, this trope didn’t sit right with me.  I recall an episode of Veggie Tales which imagined a world without a belief in an afterlife, portraying cops who felt no motivation to chase down the bad guys because what would be the point?  This is the perspective you get when you’ve had drilled into you that your religion is the only thing able to make people good.
But Phil’s personal development didn’t end there, and neither does ours.  Some of us who deconverted did in fact go through a transitional period in which we struggled to find our bearings.  During that unstable period some may very well make some foolish choices and follow impulses which are less mature.  As with anyone who learns something new, there is often a period of “adolescence” in which you know just enough to find fault with what others think but not enough to appreciate what parts they got right.  The good news about adolescence is that you grow out of it (unless you’re Donald Trump).  Unfortunately, some people will want to judge you the rest of your life based on how you behaved during this transitional time period, but these are not your friends.  They would probably hate having someone else do the same thing to them.
As Phil matured, he got better acquainted with himself and with everyone else around him.  His impressive knowledge of the intimate details of every person in town revealed that he had spent countless hours sitting and listening to people telling their stories, which is perhaps the most powerful education anyone could ever have. In the meantime, he also learned more about himself and about what really makes a person happy—what makes life worth living.
He discovered that investing time and care into the lives of others made for a more fulfilling life.  He had all the time in the world to try out every other way of living and that’s the one he chose in the end.  He would never land that dream job working for the big network, but he would find a way to make his day in Punxsutawney as meaningful as it could possibly be under the circumstances in which he found himself (see what I did there?).  This is what humans do if allowed the time and freedom to discover for themselves what truly makes us happy. 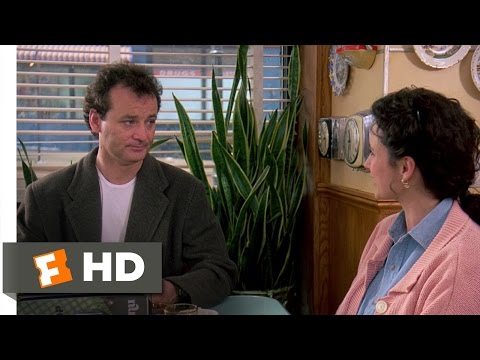 Some will want to stop the movie at Phil’s lowest point.  That’s the end of the line as far as they’re concerned.  For those people, nothing good can come from losing a belief in everlasting consequences.  But that’s not how the movie ends, and my experience corroborates the message of the movie.  What I’ve seen in real life echoes what Groundhog Day suggests is true of human nature:  We are equally capable of both great selfishness and noble altruism, but the enjoyment of the latter ultimately eclipses the thrill of the former if only you’ll give people the time and opportunity to figure that out.
In the end, Phil grew into his full potential as a human being.  He learned to sympathize with others and to identify with them in their life situations.  He learned compassion, cooperation, and humility. He also grew in his ability to love and to appreciate beauty. All the external motivators were removed, and he became a better man for it, the kind of man which Rita wanted to be with in the first place.  In the end he got the girl after all (who doesn’t want the story to end that way?). He broke the curse by becoming more than the man he was when he entered this purgatorial time loop.  The next day finally came, and a new man greeted the morning, ready to find out what new things could be learned and explored.
Now let’s just all hope they never try a remake or a Groundhog Day 2, because this one is just perfect the way it is.
[Image Source: mxdwn]
(Portions of this article appeared previously on Godless in Dixie)
__________
If you’d like to keep up with what I’m doing, you can “Like” the Godless in Dixie Facebook page: