Here on the first day of the new year I want to look back to see which posts over the last twelve months found the most traction among the people who read Godless in Dixie. Just like every year, I’m going to list the top ten posts according to page views, and then throw in two or three honorable mentions because they meant something to me, and I want to make sure people have a chance to check and see if they missed them the first time around.
One unique thing about this year is that I chose to write about current political topics because it was an election year, and at least one of the top posts by traffic was about that. Given the short shelf life of a post about news items of the day, and given that virtually everything I predicted about the 2016 election was wrong, I’m going to leave those off of the list.

1. God’s Not Gay: SNL Parodies the Christian Persecution Fantasy. Just as it did two years earlier, a cinematic release from PureFlix (the saccharine evangelical Christian answer to Netflix) in the lucrative God’s Not Dead franchise inspired the most widely shared posts of the year for Godless in Dixie. Rather uncreatively named God’s Not Dead 2, this year’s sequel to the original local favorite (it sold out four weekends in a row in my hometown) also inspired the folks at Saturday Night Live to do a spoof about how important NOT being gay is to God. Not much content of my own in this one, but the video was funny, and folks clearly got a good laugh from it.
2. Persecute Me, Please: God’s Not Dead 2 and the Evangelical Lust for Victimhood. Together with the descriptive title, the first three lines of this post pretty much sums up what I had to say about this movie:

Incidentally for those with less time than it takes to read a 2,000 word review of a movie that most certainly wasn’t worth the price of admission, I also wrote an abbreviated review in under 300 words (read that here), and I also live tweeted my way through the film (link here) because my hands had to do something to keep from throwing something at the screen every time they brought on another Christian apologist pretending to be an expert in something in which they have no authority whatsoever.
Finally, one of the most widely shared articles of this year actually came from last year and was recirculated due to the release of the sequel. In that article, I explain from my own personal story how, in the Deep South, you’re more likely to encounter discrimination for being a teacher who is an atheist rather than one who is a Christian (see “The Sequel to God’s Not Dead Happened in My Classroom“) like virtually everybody else in the region.
3. What Does the Bible Say About Abortion? As the presidential election drew near, and as it became apparent that white evangelical Christians were about to vote for Donald Trump to the tune of 81% based on the promise that he would appoint judges who would ban abortion, I decided to lay out the story of how that came to be a thing for their tribe (it didn’t used to be). It turns out the Bible doesn’t condemn it at all, and in one place it even seems to prescribe it.
4. The Most Fantastically Failed Prayer in History. If you’re frustrated your prayers don’t come true, take heart. It just so happens that Jesus didn’t get his prayers answered, either. He even had the nerve to gamble his own reputation on one particular thing that never did materialize. In fact, it failed catastrophically.
5. Why Do Intelligent, Well-Educated People Still Believe Nonsense? After a long conversation with one of the atheist movement’s most well-traveled anti-theists brought home to me how low an opinion some have of religious people’s intelligence, I wrote this piece to explain why some of us made it well into adulthood still believing a great deal of what we were taught to believe from our youngest days.
6. So Long, Self: How Christianity Teaches You to Hate Yourself. After hearing someone I care about disparage herself one too many times in front of an audience of her peers, I wrote this to reemphasize how utterly damaging Christian theology can be to a person’s self image. I’ll be returning again and again to this central theme, and in fact my next “Godless Walk Through the Bible” article will revisit this very thing again later today.

7. Shoot Christians Say to Me (Video): 17 Common Challenges & What I Say Back. This video came from a talk I did at Apostacon 2015, a conference designed specifically for formerly religious people who now no longer subscribe to the faith of their earlier years. I listed a little over a dozen of the most typical responses I’ve gotten from friends and family, and what I’ve come to say in response. 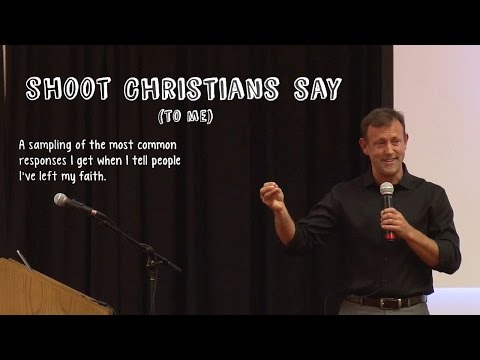 8. Four Kinds of Love That Aren’t Really Love. In this post, I list four demonstrations of Christian love that do more harm than good: Shunning, Withholding, Crusading, and Giving Gifts with Strings Attached. Each of these acts of “love” aren’t really love because they’re rooted in manipulation rather than respecting our boundaries. It doesn’t matter what feelings are operating beneath the surface to produce these actions, the actions themselves are what impacts the lives of the other person.
9. Heart Shaped Scars: Coping with the Loss of Faith and Family. Without a doubt this was one of the best posts ever written on Godless in Dixie, and I cannot claim it as my own. It was a guest post by Anna May Shinn, who lost her father a few months before. She opens her heart out and somehow weaves together one of the most beautiful articulations of the complexities of loving dysfunctional family when they don’t accept you for who you are. If you read nothing else in this list, I hope you will set aside some time to read this.
10. Why Some People Can’t See Racism. Written in response to the creeping encroachment of alt-right intolerance among atheist and anti-theist writers and YouTubers, I take my best shot at explaining what it is that people don’t see underneath the fabric of American life that keeps some people down while lifting others up…even without their awareness. I have much more to say about this, but this article is a start.

No list of Godless in Dixie posts for 2016 would be complete without mentioning two other things I started this year. First, I embarked on a chapter-by-chapter review of Tim Keller‘s apologetics book The Reason for God. To date, I have written 19 entries totaling nearly 60,000 words, with one more summary post yet to come. I hope to compile these into a single volume for publication sometime over the next year or so. Detail forthcoming after I get settled on a publisher.
In the meantime, you can find a complete list of those articles at the bottom of each of them, along with embedded video reviews done by my friend Steve Shives. You can start anywhere you like, but if I had to choose a chapter that struck me the most while writing about it, I’d start here:

One other post that topped the list of shared articles (and one that encapsulates a number of themes regularly recurring on this blog) was the post about the story of Lot and his family. Few stories pack so many insightful glimpses into what should rub us the wrong way today as we read this book as this one story does.

And last but certainly not least, I cannot finish this post without once again celebrating the launch of Removing the Fig Leaf, a blog about recovering a healthy view of human sexuality after leaving religion. The first and most explanatory post about that blog can be found here:

There are so many articles yet to be written for that blog, and so many ideas and experiences yet to explore. But what’s already been written has found traction among so many that I anticipate even greater things yet to come over the next year for that blog platform.
Incidentally, if you read anything on that blog that strikes a nerve for you, I hope you will consider contributing content yourself at some point in the future. We are always looking for submissions (heh) and would like to hear what you have to share. Feel free to message me through this blog or email removingthefigleaf@gmail.com.
Be sure to follow these blogs and never hesitate to drop a line anytime you’d like to chat, or any time you have a question you’d like for someone to address. I always love hearing from people who have benefitted from what has appeared in this space.
Here’s to 2017 being a much better year than 2016, because good grief it has to be. I’m determined to make it so for myself. I hope you’ll join me.