One of the more difficult quandaries for anti-choicers is the issue of rape and incest victims. Mostly because it is really hard to sound like anything other than a monster when suggesting that a 13-year-old ought to be forced to have her rapist father’s child. And if you make an exception for that, then you’re admitting the circumstance behind a birth makes a difference in deciding the fate of a fetus, which contradicts much of the anti-abortion narrative.

But Oklahoma State Rep. George Faught has found a way around that!

Faught is the author of a snazzy new bill in Oklahoma, HB 1549, that would outlaw abortion in the case of a genetic abnormality — which can include anything from Down syndrome to the child being born with its brain outside its head, or even some kind of condition that could mean that the child will only live for a few weeks, in incredible pain, and then die. Which is a pretty inhumane thing to do, I would say!

During a discussion of this bill, Rep. Faught ended up in a conversation about whether or not he believes rape and incest are the “will of god.” And wouldn’t you know it, he does! 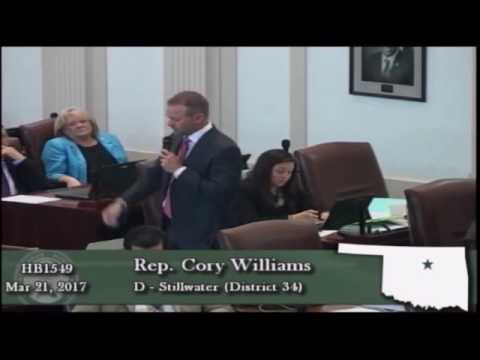 Oklahoma State Rep. Cory Williams (D) asked Rep. George Faught — who authored the bill — if rape is the “will of God.”

“Well, you know, if you read the Bible, there’s actually a couple circumstances where that happened,” Faught began. “The Lord uses all circumstances. I mean, you can go down that path, but it’s a reality unfortunately,” he said.

I know I don’t believe in God and all, but how could anyone believe in a God that wants people to get raped? Why would you worship someone who makes rape part of His Plan? Who reads those biblical stories about rape and incest and thinks, “Yeah! That guy! I’m gonna worship the heck out of him!”?

And people wonder how Charles Manson got so many devoted followers… Sheesh.

Faught was willing to admit that rape or incest “may not be the best thing that ever happened” to the victims — surely a courageous stand for anyone to take — but added that rape and incest, if they are to occur, is what God wanted for the victims.

To recap: If you’re raped, it’s because God wanted you to get raped. If you get pregnant? Also part of His Divine Plan! Because God really, really wanted to create a human person that shared your DNA and your rapist’s DNA! For reasons! And if you have an abortion, it’s like you’re insulting God’s baby-making preferences. And you wouldn’t want to do that, now, would you?

It sure is a good thing that we don’t decide our laws on “God’s will” — because if George Faught is right, and everything happens because God wants it to happen, then no one can really be guilty of anything, can they?