There are no good reasons for nonreligious alcoholics and addicts to join faith-based 12-step recovery programs, but plenty of bad ones. 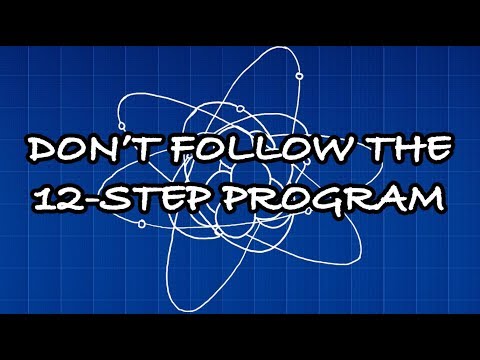 That’s the conclusion of Owen Morgan, a millennial YouTube vlogger who became addicted to drugs for a few years after his Jehovah’s Witnesses family shunned him for leaving their faith (though he declines to fault them for his downward spiral).

“Ultimately, I can’t blame anybody but myself,” he says in a 2017 video under his Telltale Atheist brand (or Telltale, for short) titled, “Don’t Follow the 12-Step Program.”

In fact, the importance of personal accountability is gospel to Morgan’s argument, that 12-step programs and their “higher power” ethos seek “to replace an addiction to a substance with God. They both act on the brain in similar ways.”

Morgan notes that seven of the 12 steps in a traditional 12-step addiction-recovery program directly involve the intercession of “God” and the addict’s acceptance of His supreme agency as the cardinal tenet of recovery. He says the God steps should simply be removed from the list. Read the complete list of steps here.

The problem, as Morgan explains, is that if an addict’s motivation is “external” (i.e., submitting to God) rather than “internal” (relying on personal goals and drivers), recovery from addiction is far less likely.

“I’ve seen many people quit [drugs or alcohol] for the sake of girlfriends or a child,” he says in the video. “The problem is that if that girlfriend takes off or if you get into a fight with your son or daughter, you go right back to it.”

He believes such external motivators aren’t “genuine” and long-lasting. More powerful and crisis-resistant motivators, he proposes, are the realization that “you’re hurting people around you,” don’t like how you behave when you’re high, or are “sick of being sick all the time.”

Otherwise, he argues, you’re just trying to do what others want and not what you need to do to improve your life for the long haul.

There’s just no need for God in the process, he stresses. For example, he suggests that Step 12 — “humbly” asking God to “remove our shortcomings” — is “worthless.”

“Nobody can remove our shortcomings; only we can change how we act. …” he stresses. “Take responsibility for your actions and change them. Don’t rely on somebody [or something] else to fix it for you.”

In the meantime, as lots of people are taking part in spiritualized 12-step programs, more than half fail to remain sober up to five years (according to Alcoholics Anonymous (AA) data in 2017). Only 13 percent of participants at that time stayed on the wagon for 6-10 years, 14 percent for 11-20 years, and 22 percent for more than 20 years.

Morgan primarily is an activist against religious cults, but he also views AA as a cult. He said both share the same hallmarks of obsessive zealotry.

He says family members of AA participants often complain that “they won’t stop talking about it or talking about God constantly. They cram God down people’s throats much like a cult would do.”

Morgan offers a much-reduced list for people wanting to kick their drug or alcohol additions in a nonreligious environment. It has only six steps:

Thanks to Jesse Magnum of Proud Atheists! Facebook site for sharing the link to Owen Morgan’s video embedded above. FYI, I posted an article August 9, here, on the paucity of secular addiction-recovery programs available in the U.S.