Americans are now arguing about the removal of public statues of Confederate military leaders of the U.S. Civil War, like iconic commanding Gen. Robert E. Lee and Gen. Nathan Bedford Forrest, founder of the Ku Klux Klan, the infamous Southern racist, white supremacist, paramiliary organization that terrorized former slaves after the war and long beyond.

It is a reasonable national discussion to be having in this “Black Lives Matter” moment in the U.S., considering that the so-named and short-lived Confederate States of America was a secessionist collection of mainly Southern planter states, and its military leaders led armies in treasonous insurrection, a rebellion, against the federal government. Southern secessionists like to say the war was about states’ rights vs. the U.S. government but it was really about preserving the “peculiar institution” of slavery and its staggering profitability in the South.

The question today, despite the enormous historical importance to America of the doomed Confederacy — the “Cause” — is whether U.S. cities and towns should be honoring, with eternal statues, the ill-fated rebellion’s treasonous actions that ultimately resulted in the deaths of more than 600,000 Americans from combat, disease and the collateral slaughter of civilians?

Political leaders in quite a few Southern cities and towns, some now with majority black populations, have in the past several years and recently voted to remove such statues. But the trend has, unsurprisingly, been controversial due to the deep Southern connection to its beloved Civil War heroes. Statue mania is also gripping other countries. Here’s an interesting BBC story about South African activists wanting to remove a statue of white supremacist, imperialist diamond merchant Cecil Rhodes. And a video of Native American protestors pulling down a statue of Christopher Columbus at the Minnesota State Capitol (protestors decry the slaughter of native americans in the wake of European conquest and domination that followed Columbus’ arrival in the New World). 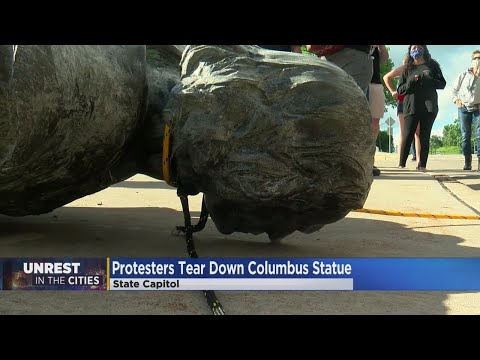 Religion is at the heart of all this atrocity, stemming from the historical European ethos of white Christian supremacy and, thus, divinely ordained dominance of the earth.

Which brings me, perhaps unexpectedly, to Roman Emperor Constantine (280-337 CE), who was born in what is now Serbia and died in present-day Turkey. Religion, though Pagan for most of the Roman Empire’s long existence, was a driving force for its imperialism and aggression, and eventually Christianity’s imperial impulses supplanted its pagan gods.

So Constantine is relevant to this discussion today because he ended the persecution of Christians in his empire and jump-started the faith’s ultimate development into a powerful institution that intermittently ruled both religious and temporal life in medieval Europe.

And I’ve been reading some assertions among nontheists online that statues of Constantine around the world should be removed, considering the brutalities and horrors that Christianity inflicted on humanity over long centuries of dominance despite the broad good the Church bestowed. Like this sentiment condemning Constantine, tweeted from @Secular Scarlet:

Ok..Im joining the bandwagon… I want the Statue of Constantine taken down from in front of York Minster… ( c272- 337)…

He brought Christianity to Britain an unforgiveable fucking evil if ever there was one � pic.twitter.com/XqxDxvEVl0

History strongly indicates that without Constantine’s purposeful privileging — he ultimately embraced the faith himself but reportedly wasn’t baptized until just before he died — Christianity would never have blossomed into the gargantuan and supremely powerful institution that it became. It is unclear if the vain ruler’s most authentic devotion was to God or himself. Nonetheless, without his enactments for the faith we might never have had to endure the Crusades, the brutal Inquisition that hunted and executed doubters of the faith, countless burnings of “heretics” at stakes and other depraved tortures and executions, and even the embedding of dominant and coercive Christianity in modern societies, such as the United States’.

Constantine’s policies enabled Christianity to acquire great wealth and influence in his empire, and a strong, durable institutional structure. He gave the Church and its many subsets the equivalent of permanent tax holidays to they could be free to fully spread the word of God, and he administered a broad and generous program of church building throughout the empire at government expense, including the original Hagia Sofia cathedral (now a mosque) in Istanbul, Turkey, and St. Peter’s Basilica in Rome.

“Constantine was the first Roman emperor to profess Christianity,” according to the Encylopaedia Britannica. “He not only initiated the evolution of the empire into a Christian state but also provided the impulse for a distinctively Christian culture that prepared the way for the growth of Byzantine and Western medieval culture.”

It is a culture that’s now embedded in and in many ways characterizes contemporary American society, as it long has.

Like current U.S. President Donald Trump (“I am the chosen one,” he once proclaimed), Constantine viewed himself as God-sent, as did his subjects. The triumphal arch erected in his honor at Rome after the battle (the Battle of the Milvian Bridge) that secured his rule of both halves of the empire credited his victory to the “inspiration of the Divinity” plus his own own exceptionalism.

“A statue set up at the same time showed Constantine himself holding aloft a cross and the legend ‘By this saving sign I have delivered your city from the tyrant and restored liberty to the Senate and people of Rome.’”

Sound familiar? Remember President Trump holding a Bible aloft at a church near the White House recently, suggesting that he is the anointed avenger of Christianity’s God to save America from what Attorney General Bill Barr calls the scourge of metastasizing  “secularism” in the land, and to return “Judeo-Christian tradition” to U.S. governance.

So, do we want to condone statues honoring Constantine, whose unleashing of Christianity loosed a maelstrom of atrocities and suffering over centuries, or of virulent racist traitors like Nathan Bedford Forrest, who dishonorably sought to mitigate the South’s unmitigated defeat in the Civil War by terrorizing African-Americans into not embracing the full equality bequeathed to them in the Abraham Lincoln’s seminal Emancipation Proclamation.

Personally, I see history as history, and instead of tearing down its icons of  memory I think a more constructive tack would be to add to not remove from — such as liberally adding statues of American heroes of color (civil rights pioneer Martin Luther King, historian and activist E.B. Dubois, writer and orator Frederick Douglass, and Rosa Park, whose refusal to sit at the back of an Alabama bus sparked the Civil Rights Movement, to name a few). And not just black American heroes but from American immigrants of many ethnicities from around the world and their U.S. descendents.

Pulling down statues reminds me of the Afghan Taliban using howitzers to destroy priceless, ancient Buddhist statues because they believe Islam is the one true religion and everything else is punishable heresy.

In fact, there’s no “one true religion,” because all religion is but a dream.

It makes sense not to hide history but to learn from all its enraging, confounding contradictions in the bright light of day.