Darryl Daniels, the first African-American sheriff of Clay County, Florida, said in a video Wednesday that “God is absent from the media’s message or Black Lives Matter or any other group that’s making themselves a spectacle disrupting what we know to be our quality of life in this country.”

Daniels, a first-term incumbent seeking re-election in a crowded seven-candidate field, vowed in the video, flanked by 18 county deputies, to “put down any protests that aren’t peaceful with the full force of his office and with the help of [deputized] gun-owning residents,” the Florida Times-Union reported.

Deriding civil-rights protesters as “godless disruptors,” the Times-Union wrote, Sheriff Daniels warned them to stay away from Clay County, a suburb of Jacksonville:

“And if you come to Clay County and you think for one second, we’ll bend our backs for you, you’re sadly mistaken. I know what happens when lawlessness prevails. And in this day and time, God is raising up men and women just like the folks standing behind me who will have strong backbones and will stand in the gap between lawlessness and the citizenry we’re sworn to protect. … Yes, we’ll protect your constitutional rights as long as you remain under the umbrellas of peaceful protest or peaceful march. But the second you step out from up under protection of the Constitution, we’ll be waiting on you and we’ll give you everything you want. All the publicity all the pain all the glamour and glory for all that five minutes will give you. Is it a threat? Absolutely not.”

What he’s calling for is deputizing so-called godly people with guns to help him combat “godless” civil-rights protesters who aren’t “peaceful.” See full text of his video statement at the end of this Officer.com article here. 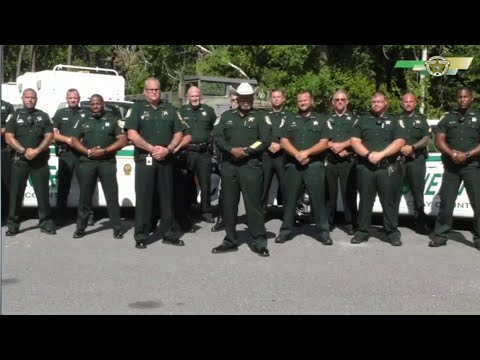 Unsurprisingly, rival sheriff’s candidates view the idea as dangerous, self-promoting and an invitation to civic chaos.

“Threatening to ‘make special deputies of every lawful gun owner in this county and I’ll deputize them’ is going to make the problem worse,” he said. “Police officers with more than 1,000 hours of law enforcement training can have problems in high-stress situations. Imagine putting a badge on someone with zero training — no de-escalation training, no firearms training, no training with the law. I am not sure what he is thinking, but it is not the kind of thinking we need from our top cop.”

“What Daniels said yesterday may sound tough and macho. But, instead, it is a call for vigilantism and another signal that he is incapable of leading the sheriff’s department and keeping Clay County safe,” Cook said. “… Instead of dealing with real issues in a meaningful way, he is behaving like a reality show sheriff and calling attention to himself. To make matters worse, he pulled 18 officers off the streets to be used as props for his taxpayer-funded campaign stunt. It’s no wonder morale is so low among our fine officers.”

The black-owned magazine Essence wrote this about Daniels’ three-minute video:

“Despite his rant about ‘lawlessness,’ as the Times-Union notes, Daniels is under investigation by the Florida Department of Law Enforcement in relation to an affair with a former colleague—who was subsequently falsely arrested—while Daniels was employed at the Jacksonville Sheriff’s Office. Currently, Daniels, who has dreams of being a congressman, is up for reelection.”

One main question begged by this self-serving political stunt is, “What does God have to do with it in the first place?”

The answer is Sheriff Daniels is pandering to religiously conservative voters who lean hard toward “law and order,” and, in fact, evoking the divine is irrelevant to the situation. It’s probably safe to say that many Black Lives Matter protesters — the peaceful vast majority and the violent-fringe few — are good, God-fearing Christians understandably seeking justice.