Our Rapture-awaiting U.S. secretary of state, Mike Pompeo, is at it again further illustrating, inadvertently, why knee-jerk Christian conservativism is bad for the republic.

Speaking at the unveiling of the debut 60-page report of the Commission on Unalienable Rights, Pompeo opined that “the events roiling the United States are antithetical to the nation’s ideals” and that the American way of life and its founding principles are “under attack,” according to a Washington Post report on the speech.

He was implying that protest and a sometimes uncomfortably free press are somehow anathema to Americans and a betrayal of our deepest ideals.

The protests and the media’s focus on the nation’s past historical errors yet to be fully acknowledge is supremely American. What is un-American is that Pompeo and other Donald Trump henchmen trying to hide our sins and give unearned glory to flawed understandings of the republic’s history. 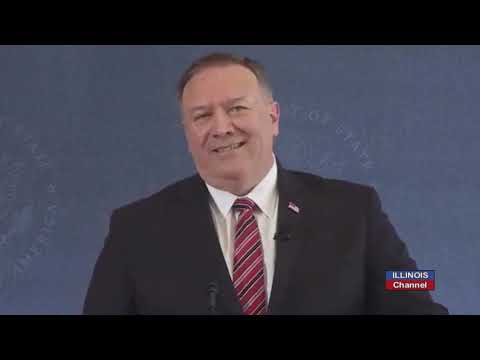 Among the bogus national “ideals” Pompeo ascribes to (as even more extravagantly does Attorney General Bill Barr), is the idea that America is a “Christian nation” founded on Judeo-Christian ethics. In fact, we are a multicultural, religiously pluralistic country founded by global immigrants, in which Christianity is — by happenstance, not intent of the Founding Fathers — the majority faith.

But conservative Christianity and politics are driven by one overarching ideal: the status quo in a rich and powerful country is inherently good and must not evolve. Change is to be feared and stopped at any cost, least of all sacrificing reason.

In fact, the unspoken goal of the Commission on Unalienable Rights, in Pompeo’s mind, is to create a “hierarchy of rights” (Democratic New Jersey Sen. Robert Menendez’ words) in which some rights are more unalienable than others.

For Pompeo, among most unalienable rights are those that would allow Americans to never have to do anything violating their deeply held religious beliefs, however specious, to the point that they can deny public services as part of corporate responsibility or personal jobs to LGBTQ people and those seeking legal abortions.

Keep in mind that this belief is not a rational, evidence-based concept but something ripped whole cloth from the Bible, a millennia-old book of religious myths that reputed asserts, for instance, that homosexuals are an “abomination.” This is the cowardly old world Pompeo and his ilk would have America return to.

Although the rights commission came under some fire for its white-male-heavy membership, it apparently doesn’t share Pompeo disgust with recent protests and media coverage of evolving national discussions on race. As the Post article pointed out, the commission’s report “called the recent civil unrest a testament to ‘the nation’s unfinished work in overcoming the evil effects of its long history of racial injustice.’”

“The credibility of U.S. advocacy for human rights abroad depends on the nation’s vigilance in assuring that all its own citizens enjoy fundamental human rights. With the eyes of the world upon her, America must show the same honest self-examination and efforts at improvement that she expects of others. America’s dedication to unalienable rights — the rights all human beings share — demands no less.”

Yet, Pompeo is unfazed.

“[T]oday, the very core of what it means to be an American, indeed the American way of life itself, is under attack. Instead of seeking to improve America, leading voices promulgate hatred of our founding principles,” he said in his official address at the National Constitution Center in Philadelphia.

“They want you to believe the Marxist ideology that America is only the oppressors and the oppressed,” he said, according to the Post. “The Chinese Communist Party must be gleeful when they see the New York Times spout their ideology.”

The point is that arch-conservative American leaders want to force the nation to maintain a over-glorified, inaccurate and inevitably destabilizing view of what America truly was and is, under the guise of patriotism.

True patriots should want to look at our nation, warts and all, and if necessary excise or treat the unsightly parts. But first we have to open our eyes.