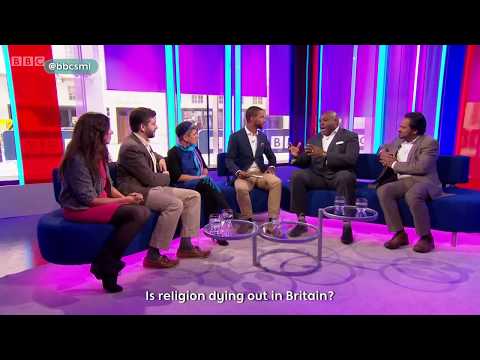 (Watch video discussion about the 2017 BSA report above.)

Considering that a similar slide has been occurring in the United States the past few decades, if later-starting than Britain’s, the British survey strongly indicates where Americans may be heading in their general attitudes toward religious faith.

In its section on religion, the report summary states:

“We find a dramatic decline in identification with Christian denominations, particularly the Church of England; a substantial increase in atheism and in self-description as ‘very’ or ‘extremely’ non-religious; and very low confidence in religious organisations, but tolerance of religious difference.”

Simultaneously, survey results indicate there’s been “a steady increase in those belonging to non-Christian faiths.”

The BSA survey found that whereas only 31 percent of Brits did not belong to a religion in 1983, now 50 percent don’t, and those affiliated with the Church of England halved (40 percent to 20 percent) during that period.

“This change— which is likely to continue— can be explained by generational replacement, with older, more religious, generations dying out and being replaced by less religious generations,” the report stated. “There is little evidence that substantial numbers find religion as they get older.”

The survey indicated that nearly two-thirds (64 percent) of Brits aged 18-24 are unaffiliated with any religion, compared to 28 percent of people aged 65 and older. Fifty-six percent of people who currently belong to a religion or who were raised in a faith tradition never attend church services or meetings; only 14 percent attend weekly religious gatherings.

A summary in the report’s “Key Findings” states:

“Today, following decades of secularisation and social change linked to industrialisation and the rise of liberal democracy, we can see clearly not only a shift away from religious worldviews, but also the strengthening of confidence in science and technology, which not only permeate our day-to-day lives in practical ways, but also provide an alternative way of interpreting and understanding the world (Wilson, 2016). While trust in religious institutions is waning, trust in science and scientists is high. If there is indeed a crisis of trust in Britain today, it is far from being in evidence everywhere.”

Since the 1960s, the U.K.’s growing secularization, along with women’s and LGBT movements, has “brought about fundamental changes in our moral framework for sex and relationships, as well as a decline in traditional, religiously informed understandings of the proper role of men and women in society,” the report emphasized.

“Sexual morality is almost unrecognizable from its post-war starting point, with homosexuality and sex outside of marriage viewed resolutely through a liberal lens and even older generations shifting their views,” the report continues.

But the decline in religion and belief among Britons most grabbed the attention of the survey team. Its report contends that the drift “is not simply a private matter for individuals and families, but rather a trend with profound implications for our social norms as well as our public institutions.”

Data reveals that where two-thirds of British citizens identified as Christian in 1983, that proportion is now 38 percent. The few religions that are gaining adherents, such as Pentecostal Protestantism and non-Christian faiths, are benefitting mainly form growth “driven by migration from traditionally religious cultures in South Asia, West Africa and elsewhere,” the report states, adding,

“Even so, the British public as a whole is becoming steadily, perhaps inexorably, more secular.”

The report concludes that:

“As our society has become more secular, the role of religious institutions and religious identities in determining our moral and social norms has weakened. Other worldviews, such as scientific rationalism, and liberal individualism now play a more significant part in British society, shaping how we understand the world, make decisions and relate to each other.”

For secularists everywhere, this is all enormously heartening news, as one of the world’s strongest democratic societies seems to be inexorably shedding its religious past for a more rational future.

We can only hope the same sensibility is also trending, albeit somewhat slower, in America.