This is exactly why church-state separation is critically essential in a secular democracy.

I’m talking about something I read this week concerning an incident in Coldspring, Texas, a couple of months ago where elected county officials, criticized by an atheist group for unconstitutionally allowing Christian crosses in their courthouse windows, doubled down and illuminated them. 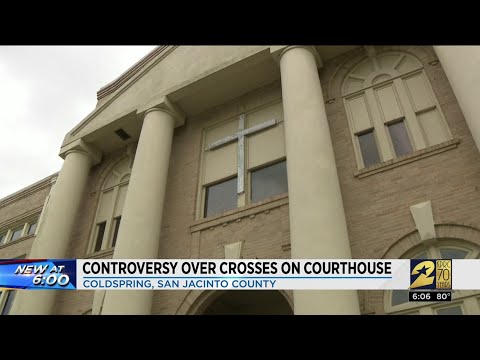 If this isn’t a perfect example of government endorsement of religion—keep in mind that such tax-funded religious promotion is prohibited under the “establishment” clause of the U.S. Constitution—nothing is.

When the Wisconsin-based Freedom from Religion Foundation (FFRF) complained to the San Jacinto County Commission about the prominently displayed “Latin” crosses (i.e., Christian crosses) at the courthouse, commissioners voted unanimously not only to not remove them but to authorize their illumination for greater prominence and visibility.

Right-wing media outlet Breitbart News reported that residents in the 29,000-citizen county “celebrated on social media after [they] saw photos of the illuminated Christian symbol on the courthouse.”

“Dwayne Wright, who serves as the county’s GOP chair, took this photo [of one of the lighted crosses] and posted it on his Facebook page saying, ‘THIS is how we roll in San Jacinto County! Not only did we not cower to the Wisconsin Whiners, we Lit Them Up!’”

Now the office of the state’s Republican Attorney General Ken Paxton is getting involved. Because of course they are.

In a letter sent to San Jacinto County Judge Fritz Faulkner and county commissioners, First Assistant Attorney General Jeff Mateer expressed his support for their overt Christianity and promised to defend them if FFRF ended up filing a lawsuit.

“Take note that on occasion FFRF will file a lawsuit to try to force government to purge all acknowledgment of religion,” [Mateer] wrote. “If that occurs, we look forward to supporting your lawful decision to retain the crosses.”

This incident reminds us of a false but prevalent mindset among many Americans (including elected officials) that religious freedom means if a community sees itself as Christian it can enforce its religious values on its government and, thus, everyone under it.

It doesn’t mean that, of course. It means you can believe whatever you want and express it publicly and personally but not in taxpayer-funded public spaces or activities, including formal government bodies and buildings.

In Mateer’s letter to San Jacinto County officials, he characterized FFRF as seeking to “impose its anti-religion agenda through intimidation tactics,” and that “your county may display historical religious symbols, like crosses, without violating the Establishment Clause of the First Amendment,” the Friendly Atheist post reported.

The problem with these kinds of controversies is that because Christianity and its symbols have been so ubiquitous in American history, some of them over time have come to be seen by many citizens—even some U.S. Supreme Court justices—as virtually secular.

The Supreme Court has ruled that “In God We Trust” is essentially “ceremonial” and that “prominently” placing the phrase throughout schools in America, as state laws prescribe, is constitutionally appropriate.

But, objectively speaking, it’s not.

In fact, anything evoking God is inescapably religious, no matter how the Supreme Court splits this hair. Ask any religious nonbeliever—there are tens of millions of us in the U.S.—whether “In God We Trust” is religious or only “ceremonial.”

The unavoidable presence of this godly phrase in our schools and on all of our money explicitly assumes and proclaims all Americans trust in God and are in agreement with this. All don’t and aren’t. In fact, a very large minority, about 25 percent of the populace, don’t and aren’t.

So when pugnacious, coercive Texans decide to thumb their nose at principles of church-state separation far more sacred than superstitious dogma and symbols, they are sticking that thumb in the eye of Thomas Jefferson, George Washington and many other Founding Fathers. It’s also a kind of local religious imperialism.

This is simply subversive, undemocratic religion in action, not a reflection of founding American values.

Such anti-secular intransigence is not new in Texas. Several years ago the FFRF told the city of Hondo, Texas (pop. 9,000), that its welcoming signs in place since 1932 were unconstitutional. The signs proclaimed: “Welcome. This is God’s Country. Please Don’t Drive Through It Like Hell.”

The sign is amusing but arguably unconstitutional when authorized and paid for by city government with public funds. Hondo’s mayor tersely told the FFRF, according to Breitbart:

“There’s no way in hell we’re going to take those signs down.”

On the other hand, as Breitbart reported, city officials in Orange, Texas, complied—although many citizens were “furious”—when they were told by FFRF that they should discontinue the annual publicly funded Nativity scene on city property that they have sponsored for the past 30 years. The city manager told Fox4 in Beaumont, Texas, that officials discontinued the Christian Christmas scene in order to avoid legal costs.

Another incident is yet another reminder that, when religion is involved in faithful communities, the Constitution always takes a back seat.

When the Coldspring Special Utility District’s local water management board voted recently to discontinue displaying a cross on its water tower at Christmas, some residents who attended the meeting erupted with “boos and jeers,” Breitbart reported.

At least in some parts of Texas (and, I’m certain, a lot of other places in the U.S.), residents like to think of America as a “Christian Nation,” and to make the rest of us subscribe to that too.