I found this very true quote below on The Atheist Facebook page, and it perfectly describes how atheists experience life in majority-Christian societies.

“Being an atheist is like being surrounded by people in the middle of a role-playing fantasy game, and you can’t get them to just be serious for a minute.”

The difference is many believers think it’s absolutely real, not fantasy. For example, consider the Philippino Christian faithful in this embedded video who allow nails to be pounded into their palms before being hoisted vertically on crosses in remembrance of Jesus Christ’s execution by the Romans two millennia ago. 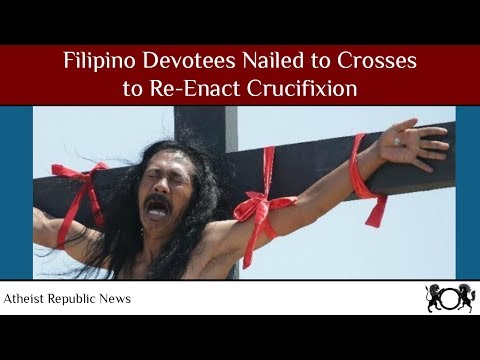 To reasonable people who do not see any evidence of divine beings in the world, this is crazy behavior. However, some zealous believers in the majority-Catholic Philippines obviously seem to believe something good will come of it. It’s actually a thing there.

Reuters news agency reports that Filipino Ruben Enaje, 58, has been “crucified” in this way 33 times and that adherents of the agonizing act believe their suffering “will wash away their sins, cure illness and lead to blessings.”  Enajae was among four people who were nailed to crosses in their village of Cutud, including one woman who was participating for the 17th time.

The Good Friday “crucifixions” have become something of a tourist attraction in Pampanga Province, where Cutud is located north of Manila, the capital.

“I thought they wouldn’t be nailed but they were really nailed, and it was for me a great event to see it live,” German tourist Johann Tenken told a Reuters correspondent at this year’s gory extravaganza, held April 19.

In fairness, the leadership of the Roman Catholic Church in the Philippines “looks down on” the Cutud “crucifixions” and other such bloody annual presentations of piety, such as self-flaggelations with whips, as penitents seek to atone for misdeeds.

I’m certain most atheists see this appalling suffering and argue that, if people would just stop thinking irrationally about deities for whom evidence is absent in the world, they could avoid a lot of avoidable, ill-advised pain.