When asked what his favorite Bible verse is, Seth Andrews cited Romans 12:9: “Love must be sincere. Hate what is evil; cling to what is good.” 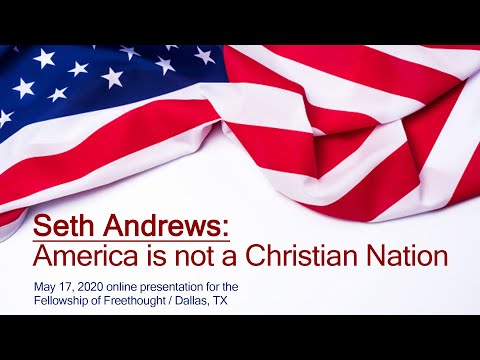 Andrews, an erstwhile fundamentalist Baptist and Christian radio host who now professes humanistic atheism, says his deconversion in 2004 was not acrimonious and that — as the scriptural reference above attests — he harbors no ill will for believers despite now being a member of the disloyal opposition.

That is exactly my sensibility regarding the religious and religion. In fact, I love and am close to religious people, which doesn’t mean I share or even fathom their beliefs in invisible superbeings. I think this way because I believe the truest test of people is how they behave toward others, and that it is independent of any imagined deity.

By this measure, atheists and true believers can be equally good and kind people, just with different cosmic views — one real, the other surreal.

Andrews, the founder of The Thinking Atheist, a popular secular website, rephrases Romans 12:9 in a more colloquial way:

“Don’t be a fake. Pursue that which brings about a positive result, for yourself and for others. Hold evil in contempt,” he told the left-leaning website AlterNet in 2014, “Of course, I don’t bind a supernatural connotation to the word ‘evil’ but rather see evil as an action.”

These are rational, materialist virtues, and I’m introducing them in this post because I think Andrews has some interesting things to say as an apostate, reaffirming some of the important and recurring reasons people flee the faiths they were indoctrinated in as children. Andrews noted that when his parents deemed his childhood public school education in conflict with his religious teaching at home at church, they transferred him to a small, private Christian school.

Andrews says his deconversion was ultimately sparked by two seminal incidents: one was the 1997 death of well-known Christian songwriter Rich Mullins in a car crash, and a video of a 2004 debate between the late atheist gadfly Christopher Hitchens and Orthodox Jewish Rabbi Shmuley Boteach. As most well-read nonbelievers already know, Hitchens could be enormously convincing, and Shmuley annoying for his abrasive personality if not his rigid theology.

Andrews said doubts in his faith emerged after Mullins died, because he could not understand how an all-benevolent God who valued every living being on Earth would end the beloved songwriter’s life “in such a pointless, gruesome manner,” according to a 2015 The Friendly Atheist blog post recounting an Andrews interview with American Atheist magazine.

This is an understandable, rational question that many atheists share.

Andrews has been busy since becoming an apostate from Christianity. In addition to his website, companion podcast and side career as an atheist speaker, he has written three books, one — Confessions of a Former Fox News Christian — published this July. It’s jacket text characterizes it as “an exposé of conservative media’s ‘closed systems’ which constantly feed on (and feed into) public outrage, ignorance, bigotry, and fear.”

I was inadvertently first introduced to Andrews recently when I stumbled into one of his The Thinking Atheist YouTube videos (embedded in this post), titled “America is Not a Christian Nation.” It provided an excellent summary of that issue.

I like to promote apostates because, to tear themselves away from ingrained faith and endure the rejection of family and friends, they usually thought through the decision very, very carefully and have compelling reasons for embracing heresy.

Atheists are not angry, aggressive people. They are people who have rationally concluded that supernatural deities, as advertised, cannot possibly be what believers think they are.

So they choose a different, more kindly and earthly path.