This illustration encapsulates one of the most compelling reasons I’m an atheist. 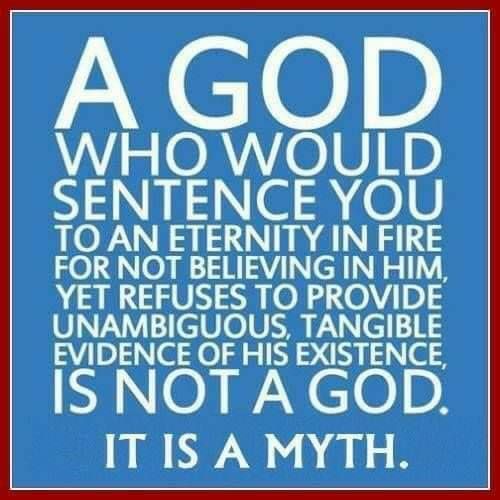 I’m an atheist because belief in an invisible, absent uber-divinity makes zero sense in the real world, especially if you apply reason to the concept.

Reason, to my way of thinking, leads one to conclude that an omnipotent deity should, at the very least, be able to make ‘His’ reality irrefutably and materially manifest in the world. But, in fact, “God” is not discernable in substantive reality and the belief of believers, however fervent, is trapped in their own brains and permanently inaccessible in any objective sense to the rest of us.

Certainly, as true believers do, we can always point to the awesome grandeur of nature as “proof” of God’s undoubtable existence, but it’s really just a talking point for debate. To scientists, secular humanists and atheists, for example, the majesty of nature reflects the inherent majesty of natural, self-driven physical processes in the universe, not divinity.

Nontheists see religious stories for what they are: myths.

One would think, the maker of the universe would easily be able to convince everyone in a nanosecond that “He” or “She” is exactly what scripture says, right? But no. Roughly a quarter of Americans, for instance, are committed nonbelievers despite having all the same “evidence” of the divine as everyone else.

So condemning anyone to eternal suffering in Hell for not believing in a being so obscure and unfathomable as “God” should be viewed, rationally speaking, as cruel and immoral.

What kind of “God” would do that?