I love Will Smith. 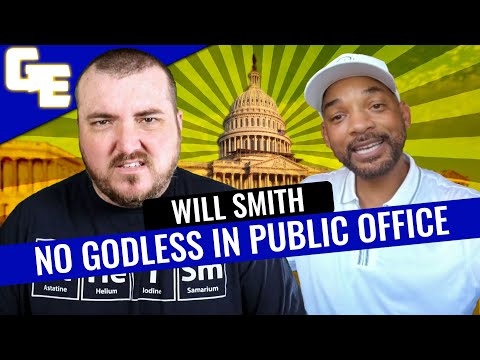 On top of that, he’s handsome, smart, warm and engaging, articulate, and seemingly just an authentically good guy. He exactly embodies why people love movie stars: they’re so not like us, somehow certainly much superior, we imagine.

Except they’re not. They’re mostly exactly like everyone else in most ways except in looks, entertainment talent and the kind of ethereal aura that fans warm their cockles in. But, of course — and we are constantly reminded of this (Woody Allen? Elvis? Marlon Brando?) — celebrities aren’t necessarily saints, immune from torture by private demons, or even sane in their political (or religious) opinions.

Which brings me back to Will Smith, who recently opined in a podcast with CNN political commentator Angela Rye on her On I podcast that what the United States needs right now are people who don’t support the “destructive aspects of loveless, godless leadership.”

Whatever that actually means.

Below is Smith’s essential quote from the show that went viral:

“… the problem is in the hearts and minds of people. So it demands that our attention begin on our hearts and minds. As a country, I would hope that a part of what we’re learning right now is the destructive aspects of loveless, godless leadership. Do not elect people that don’t have God and love in their hearts.”

When the statement drew a lot of condemnation in mainstream and social media, Smith tried and failed to walk it back, claiming that he wasn’t “talking about Church or Religion.”

Which only made it more confusing.

What was he saying? That Americans are led by “godless” people, which would mean “atheists,” who he implies are also necessarily “loveless”? And how can he talk of “god” in any fashion and claim he’s not talking about “church or religion.”

In fact, the nation is led by a president who from all evidence is neither godless (although he pays half-hearted lip service) nor loving to America’s most vulnerable citizens. Indeed, evangelical Christians saturate his administration, are a main source of his political power nationally, and push him toward amoral policies that inflict hardship and suffering on minorities (especially ones of color), immigrants and their children, women seeking legal abortion, and LGBTQ people, among others.

If this is godly, give me ungodly.

In fact, there’s zero evidence that atheists are any less loving, moral, rational or caring than any American, and a ton of evidence that they display a lot more of those cardinal virtues than religious fundamentalists — say anti-vaxxers who allow their children to die of disease because they refuse (on godly grounds) to take them to the doctor.

So, because I’m so charmed by Will Smith the actor and musician and celebrity personality, I don’t want to believe that he actually thinks “godless, loveless” atheists are the root of evil in the U.S. I would like to think he would have a more rational explanation, given the chance to expound.

But the problem is that he has said these things. And in the celebrity ecosystem and its ability to instantly broadcast such nonsense to tens even hundreds of millions of people worldwide, this darkly matters. Indeed, such viral propagation of dangerous falsehoods, misinformation and destructive lies in the 2016 presidential campaign directly resulted in the election of a deeply flawed, self-absorbed human being who even his niece warns us should not be allowed to lead any nation, much less the most powerful in the world.

Celebrity power is not hyperbole, considering people look to superstars, especially film and music artists, as almost divinely anointed experts on everything under the sun.

Note that Will Smith has 94 million followers on Facebook and is #13 on its global most-followed list (Facebook itself is #1, with 216 million). He also has 46.2 million followers on the social media site Instagram (to which he posted the Rye podcast). Add another 7.8 million fans on Chinese-owned TikTok, which it should be pointed out that the European Union is considering blocking because of espionage concerns. That’s 148 million people who Smith can directly influence every day — more followers than most countries’ populations.

No matter what Smith intended to convey with his curious statement, we can be sure millions of people who follow him will interpret it in ways foreign to what he was thinking at the time. Just what we need now: more addled confusion in the world, as a virus bedevils the planet and religion keeps looking for cracks in the façade of secular governance, particularly in America.

Let’s keep our eyes on the godly people, who are the ones doing the damage and threatening everyone with fantastic assumptions of reality. Don’t wear a mask, they say, among other silly things. God will protect us.

The godless — the heathen atheists — are pretty much keeping to themselves, reasonably wearing masks and trying very hard not to bother anyone.

I love Will Smith, but we should remember he’s not a superior human being who has all the answers to existential questions, much less is he a kind of demi-god. He’s just a regular, apparently godly guy who happens to be really good at entertaining us.