After a devastating 2004 car crash with his father, 6-year-old Alex Malarkey—that’s actually the family’s real name—went to heaven, where he was met by five angels and Jesus, who told him he would survive.

Except, although obvious in an instant to any reasonable person, Alex, in fact, didn’t go to heaven. 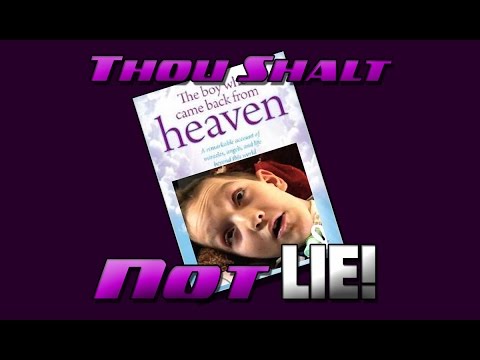 In 2010, Alex recanted the multi-faceted story, which he purportedly had told to his dad, Kevin, after emerging from a two-month, post-crash coma. An expanded version of the story was published in 2010 as The Boy Who Came Back From Heaven by major Christian publisher Tyndale House and stayed on The New York Times bestseller lists for months, eventually selling more than a million copies.

But virtually none of it was true—although the book’s cover promises “A true story”—other than 6-year-old, brain-traumatized Alex told Kevin some outlandish made-up things about his post-accident psychic experiences.

Yet, at least a million people were so ready to believe such fantasies that they bought the book recounting a fellow human being’s supposed actual encounters with these imaginings.

But, on second thought …

Alex came clean in 2015 on the conservative Christian website Pulpit and Pen, in a brief (because he is a quadriplegic) letter:

“I said I went to heaven because I thought it would get me attention. When I made the claims that I did, I had never read the Bible. People have profited from lies, and continue to. They should read the Bible, which is enough. The Bible is the only source of truth. Anything written by man cannot be infallible.”

This raises another fundamentally worrisome question about religious beliefs in supernatural agency. This story is about the unverifiability of the concept of “heaven” and problems that arise from propagating that conceit. In addition, Alex’s apparent belief that the Bible was not written by human beings but by divine agency is another example of institutionalized wishful thinking that can have damaging consequences. The latter idea leads people to believe that words in a book are divinely infallible, and to structure their lives around—and to be supremely gullible to any reaffirmation of—that belief.

It also should be pointed out that people routinely are willing to kill and die for such beliefs because of the supposed absolute authority from which they are derived.

But the specific belief in “heaven” is the issue du jour here—how Kevin Malarkey’s unqualified belief in such a place led him to believe whatever his son might have said and to publish it for the world to see as “true.”

The wages of faith

Unfortunately, those beliefs and impulses ultimately ended with the divorce of Kevin and his wife, Beth, in 2018; decimation of the family’s familial bonds; the loss of all still-unaccounted-for profits from the book; the book’s removal from sale everywhere by Tyndale; the creation of a slew of other invented back-from-heaven books and films (one of which made $40 million); and the 2018 filing of a lawsuit against Tyndale by Beth and Alex, accusing the publisher of defamation, exploitation and other charges. The suit alleges that Beth and Alex, now 21, are “on the verge of being homeless.”

According to an article in July in Slate, “a judge has dismissed most of the charges,” and the next court date is in August.

All this is to point out that beliefs can have wayward consequences, especially if they’re bogus but people believe they’re not.

“Though Alex was billed as the book’s co-author, he told me he has never even read the full contents of ‘The Boy Who Came Back from Heaven,’ let alone knowingly contributed to it. He said that some of the passages under his name were drawn from conversations with his father, but he didn’t realize they were intended for a book. ‘I didn’t write it,’ Alex told me. ‘I have no idea what’s in it. I don’t know what I said.’ He knows enough about the book, however, to feel sure that it doesn’t represent what really happened.”

Kevin Malarkey virtually disappeared for about four years and then reappeared to tell a newspaper reporter that he laid low because he didn’t want to add grief to his family. He reiterated that he still believed everything written in Back from Heaven was totally true.

A history of religious extremism

The family had a history of over-the-top Christian ideology. When family members struggled with depression and other distress after the accident, their pastor at Bellefontaine First Church of God, Gary Brown, walked a circle around their home “praying for the family’s immediate spiritual protection from some kind of demonic force,” Graham wrote.

“The war was very real,” Brown told Graham of that time in the Malarkey’s life. “The spiritual warfare was very real.”

Except that the “war,” in fact, was not against “the Devil” but against the inevitable painful reality after such a dire family catastrophe.

Kevin and Beth posted comments on the website they created for Alex—prayforalex.com—encouraging monetary and other support. One Valentine’s Day, Graham wrote, Beth posted a long entry about Alex telling her he sat “on the lap of Jesus” at the crash scene, and that “Jesus told him that he would breathe but did not say when.” Beth also put a note next to Alex’s hospital bed telling visitors that “when his mouth was wide open, that meant angels were in the room.”

After reading various accounts of this story, my first reaction was amazement in how much useless pain and disruption religious delusion can cause when people are focused on an unverifiable netherworld.

My second thought was this: Why wasn’t Kevin more worried about actual real-world risks while driving with his young son that day in 2004?

Since both were ejected from the vehicle, neither was apparently wearing a seatbelt.