Bibles are not required for swearing-in American public officials, no matter how much newly minted U.S. Rep. Marjorie Taylor Greene (R-Georgia) insists they are.

As if reasonable people need more disturbing information about Greene to better comprehend how dangerously ignorant she is of the Constitution and the law.

The United Kingdom-based Independent newspaper reported this week that it had uncovered a video clip of QAnon afficionado and conspiracy-theory-enthralled Greene shortly before she was elected to congress in 2020 and took office this year. The clip shows her saying Muslim House colleagues Ilhan Omar and Rashida Tlaib should be forced to “retake” their congressional oaths “on the Bible.”

Why does Greene believe this? She thinks (erroneously) that it’s the law. The video (embedded above) was taken when she was in the Capital, not long before she was elected, to emphasize to Reps. Omar and Tlaib that their oaths were illegitimate if not sworn on a Bible.

When someone off-camera said she was “infringing” on the two other representatives’ religion, Greene invented a rejoinder:

In fact, she didn’t have a clue.

Nothing in the Constitution requires Bibles be used in official oaths, and, indeed, the nation’s founding document specifically prohibits any such religious requirements related to public offices. The Independent article explained:

“This position has been repeated in recent years by other fringe members of the Republican party, and it’s inaccurate. There has never been a law in United States history that requires an elected official of the country to take the oath of office with a Bible or any other religious text. The United States Constitution actually states ‘no religious test shall ever be required as a qualification to any office or public trust under the United States.’ Why does the Constitution specifically say this? The Framers of the Constitution valued the separation of church versus state.”

Indeed, President Joe Biden’s newly confirmed Secretary of State Antony Blinkin just swore his oath on the Constitution, not a Bible, although Biden himself chose to use his family Bible as he has in previous oaths. Franklin Pierce in 1853 reportedly declined to use a Bible at his swearing-in (he used a law book) soon after his son died in a train-car accident, because he and his wife believed the death was a sign Pierce had displeased God by running for president. John Quincy Adams in 1825 also used a law book for his oath, and Lyndon Baines Johnson in 1963 used not a Bible but a Catholic missal in an emergency swearing-in after John F. Kennedy’s assassination — “Presumably, the missal, which was found on a side table in Kennedy’s bedroom on the plane, was easier and quicker to use than locating a Bible,” Quora reported.

The point is, there is no rule about what book should be used, or no book.

The Independent was being kind. What now-Rep. Greene was then insisting wasn’t just “inaccurate” — a misplaced comma here, an unintended double-entendre there — it was categorically, laughably false. If she didn’t know, she was ignorant; if she did, she was lying, as was her hero Donald Trump when he claimed (and continues to fraudulently insist) that he won the 2020 presidential election he actually lost.

So, pile her vast ignorance here with her previously “liking” a social media post calling for a bullet to be put in the head of Nancy Pelosi, speaker of the U.S. House of Representatives, and not condemning other suggestions of murdering other public figures. And she also believes that the Parkland, Florida, high school massacre in 2018, in which a single assailant killed 17 students, faculty and staff, was a “false flag” operation deceptively staged by liberals to stain conservatives. 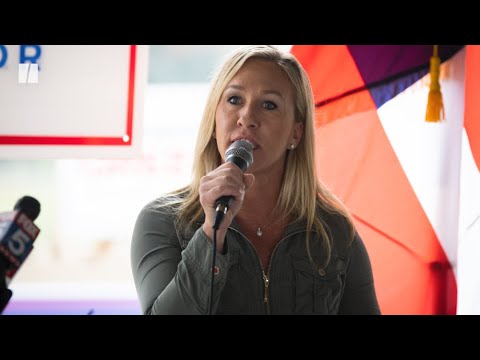 Of course, she claims that she’s not responsible for what happens on her social media sites.

“Over the years, I’ve had teams of people manage my pages. Many posts have been liked. Many posts have been shared. Some did not represent my views,” she wrote, according to the Independent. She added that Facebook posts from “random users” were being used “to try and cancel me and silence my voice.”

Self-serving nonsense. She’s wholly responsible for everything on her social media feeds (as we all are).

Now, some colleagues of Greene are fearful of representatives like her who insist on bringing firearms to the House floor along with their virulent anti-government and pro-Trump attitudes, especially after their fellow travelers invaded the Capitol in an insurrection attempt on Jan. 6 that resulted in the deaths of five people.

Rep. Greene has been temporarily banned from Twitter for her statements on that platform, and lawmakers are calling for her ouster from the Congress. Seems reasonable.

Former U.S. presidential candidate and Secretary of State Hillary Clinton recently opined on Twitter that Rep. Greene is a danger to Congress and the body politic.

“This woman should be on a watch list. Not in Congress,” Clinton wrote, according to the Independent.