“Frances” is a pseudonym. Bruenig used it in her article to protect the identity of a “tall, broad-shouldered man nearing 60” who related to her his deeply troubling youthful abuse by an infamous Catholic cardinal (then a priest), the now-defrocked pedophile and serial sexual abuser of young men, Theodore McCarrick. Among the Vatican charges that caused McCarrick to be “laicized” in February, according to a Washington Post article, were “soliciting sex during confession and committing ‘sins’ with minors and adults ‘with the aggravating factor of the abuse of power.’” 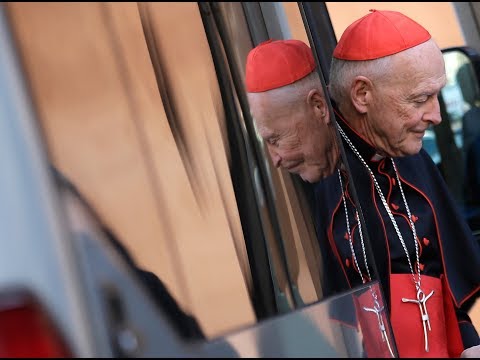 By the end of her moving essay, it is clear that Bruenig and Francis have one common compulsion due to their shared Catholicism, a tenacious need to not leave the church, despite mounting, worsening and irrefutable evidence in recent decades of the institution’s profound and systemic depravities.

This is what I assume most atheists, including myself, find so disquieting about the unending waves of sexual abuse and assault confirmations against priests and Protestant pastors that have soaked the world this new millennia. That — still — many if not most of the faithful’s professed love of “God” leaves them curiously unable to break free of once trusted and honored men of the cloth, now revealed as predatory perverts, and the sacred religious institutions they represent, now revealed as appallingly complicit.

In fact, Francis didn’t even recognize it was abuse when it was happening. That’s how such ecclesiastical abuse works. The faiths and their abusers are conferred with such sanctified authority, nearly absolute, no one could imagine either being involved in such bald-faced mendacity. Which is to say, even if some behavior seemed wrong, the victim must be mistaken.

That is why after years of trying to leave his faith, Francis found himself again attending mass, at first tentatively and irregularly, and then every Sunday just like he always had.

“Faith is really hard to do solo,” he explained to Bruenig. “I missed the community feeling of being in church.”

Bruenig completely understood, as she had her own recent history of disgust with the church’s tsunami of sex-abuse accusations and abetting of abusers in its ranks, and she was still valiantly holding on to her faith, as it were, by her fingertips, as Francis had.

“[Francis] needed some sign of eternity here in the broken present: The certainty of rituals shared with others, whose trust in the goodness of God and the presence of a transcendent love nurtures the faith of those around them. … Francis told me he thinks it’s possible to distinguish the church from the people who have for decades debased it. How dearly I wanted to hear that; how crucial it was for me to believe it.”

These ideas of permanence and goodness strengthened her as her friends demanded to know why she still attended mass despite having intense, weighty reservations about the credibility of the leaders and institutions of Catholicism.

She was clearly rationalizing the unrationalizable, but it didn’t really matter; the hold of faith was too strong on her mind. She continued:

“Francis went on in his gentle, searching tone. ‘All throughout the church, and the church’s history, you can see times where there were people who were really living testaments to their faith,’ he said. ‘And you can see people who took advantage of the power that they had. And that God allows that is just kind of, part of the mystery we’re all going to have to figure out, when we go to ask him. Right?’”

Wrong. There is no evidence that the “God” who cements them to supernatural invention actually exists in the first place. He is but a jailer of mind, not substance.

Still, Bruenig and Francis remain in their pews, kneeling in worship to a gossimer dream they insist on believing is real.

Further trying to explain the unexplainable in her essay, Bruenig wrote of an ardent moment while she sat in the church she attends:

“I was transfixed by [a statue of Jesus]; I always am. … I thought of the words of Saint Augustine [a noted misogynist, ironically]. ‘Why do you mean so much to me,’ he asked the Lord, ‘help me to find words to explain. Why do I mean so much to you, that you should command me to love you?’”

And also that “You” allow the your earthly commandants to command us.

I imagine that much the same tragic longing for and vulnerability to “God” warmed the hearts of members of Jim Jones’ People’s Temple in a Guyanese jungle — moments before they, at Jones’ command, lovingly gave the cyanide-laced Kool-Aid to their children and then themselves, and lay down to await entry to Paradise.