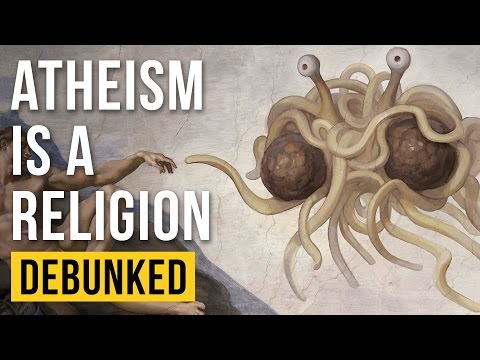 I was reminded of this in an online exchange with a reader about that very question. He was a little put out that I criticized U.S. presidential candidate Andrew Yang, here, for saying that atheism is a “religious” position.

Of course, from everything I know about atheism, it’s nothing of the sort.

But this guy wasn’t having it.

In a recent video interview, here, Yang, while trying to express his support of atheists, said,

“… it is ridiculous that people would think you are somehow less moral or less worthy of the full protection and enjoyment of all of our virtues as a society because of your religious beliefs.” (italics mine)

This is an error of inappropriate definition. Yang was either using “religious beliefs” in a casual way, like, “She religiously does yoga every day,” or he actually thinks of atheism as religious in the same way that supernatural belief is.

Both are wrong in this context.

“Atheism is a religion like abstinence is a sex position,” as comedian Bill Maher once famously—and fairly—quipped.

Atheists simply don’t believe in supernatural gods (due to nearly complete lack of evidence); religions do (despite such lack of evidence). They’re opposites. Some theists still like to insist that because atheists fervently “believe” something, that nonbelievers are just as “religious” as they are. But we aren’t, any more than believing that Donald Trump is a moral thug is a “religious” position.

When talking about “religion” in a supernatural context, the term must always encompass godly imaginings to fairly be termed contextually “religious.” Otherwise, you’re just being vague and lazy.

Well, it’s not “nothing,” considering Christian fundamentalists and others chronically use the term “religious” to try and co-opt atheist ideology by painting it as “just as religious as religion” and, thus no more or less valid. The arbitrary and false implication is that faith in fantasies is just as valid as faith in, say, science, or in the debilitating effect of a bowling ball dropped on one’s foot.

It isn’t. Objective factual evidence is the only thing that gives anything validity, substantiality, actuality in reality. Everything else, such as supernatural religion (which is definitively the only kind) and crop circles carved by aliens, is substantiation-free speculation. Even ethereal thoughts and dreams have material grounding in the brain. Note that only supernatural faiths get IRS tax-exempt status in the U.S.; certainly atheist organizations claiming undeserved religious status don’t.

Two excellent articles on what is and isn’t atheism can be found on the Atheist Alliance International website: “What is atheism?” and “Is atheism a religion?” I recommend both. If you haven’t already, you might also check out the engaging, informative video embedded above in this post.

The bottom line is that when debating the veracity of the claims of supernatural religion, it’s corrupting and self-defeating to use the term “religious” as a synonym for the phrase “emphatic about.”

When you do that you face the kind of nonsensical discourse when a believer will argue to an atheist, “Well, sir, you are religiously committed to your views, as we Christian fundamentalists are to ours. Both are just different views of reality, each valid in its own right, neither paramount.”

Yes, atheism is a view of reality. Religion, on the other hand, is a view of unreality, of a nether region wholly inaccessible to Homo sapiens and populated by invisible beings whose existence can never be irrefutably verified in the real world. Because anything supernatural, so to speak, can’t be falsified, it also can’t be realized. So for all intents and purposes in the real world, it just doesn’t exist.

I assume we atheists are totally willing to yield all claims to religion and “religiousness” to supernatural believers forevermore.

Honestly, our only interest in religious fantasies is to debunk them.