Comedy Central recently uploaded its classic 2013 Drunk History video episode of the seminal 1925 “Scopes Monkey Trial,” which exiled American fundamentalist Christianity into the religio-cultural shadows for a far-too-short while. 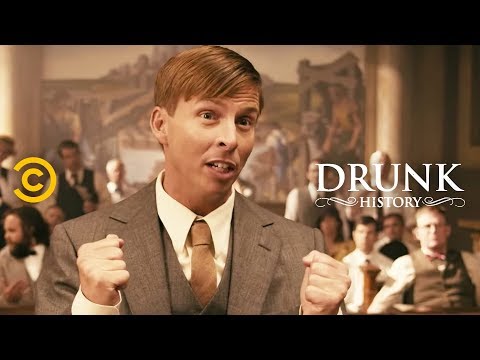 (Hemant Mehta reported on the video’s reincarnation in his August 4 The Friendly Atheist post.)

The original trial was a fascinating glimpse into the collision of Christian faith and secular science in the United States early in the 20th century, and for decades it has been the gift that keeps on giving for nonreligious folk.

The trial’s highlight was when famed defense attorney Clarence Darrow, a prominent atheist, put Christianity torchbearer Williams Jenning Bryan on the stand to defend the Bible. Bryan, a pastor and sometime U.S. presidential candidate, withered under Darrow’s fact- and evidence-based attack on biblical principles accepted as literally true by believers, and died in his sleep six days later following an “enormous dinner.”

“Darrow began his interrogation of Bryan with a quiet question: “You have given considerable study to the Bible, haven’t you, Mr. Bryan?” Bryan replied, “Yes, I have. I have studied the Bible for about fifty years.” Thus began a series of questions designed to undermine a literalist interpretation of the Bible. Bryan was asked about a whale swallowing Jonah, Joshua making the sun stand still, Noah and the great flood, the temptation of Adam in the garden of Eden, and the creation according to Genesis. After initially contending that “everything in the Bible should be accepted as it is given there,” Bryan finally conceded that the words of the Bible should not always be taken literally. In response to Darrow’s relentless questions as to whether the six days of creation, as described in Genesis, were twenty-four hour days, Bryan said “My impression is that they were periods.”

The trial reflected a growing chasm between moderns and traditionalists in a nation transforming in the first decades after the end of World War I.

“The early 1920s found social patterns in chaos. Traditionalists, the older Victorians, worried that everything valuable was ending,” Linder wrote. “Younger modernists no longer asked whether society would approve of their behavior, only whether their behavior met the approval of their intellect. Intellectual experimentation flourished. Americans danced to the sound of the Jazz Age, showed their contempt for alcoholic prohibition, debated abstract art and Freudian theories. In a response to the new social patterns set in motion by modernism, a wave of revivalism developed, becoming especially strong in the American South.”

In the end, modernism flourished after the trial, which humiliated literalist biblical concepts, and hard-core fundamentalist Christianity temporarily went into hiding, only to re-emerge stronger than ever in the 1950s and later ’80s.

The trial spawned a popular 1955 play, “Inherit the Wind,” which was later adapted into a popular 1960 movie by the same name, which captures the mindless silliness of the whole charade. Movie-industry trade journal Variety described it as “a rousing and fascinating motion picture.”

It didn’t stop there. A TV remake of the film followed in 1965, starring Hollywood aristocrats Melvin Douglas and Ed Begley, followed by another small-screen adaptation with the inimitable Jason Robards and Kirk Douglas in 1988. Then, Jack Lemmon and George C. Scott starred in a third made-for-TV recreation of the film in 1999.

A transcript of the Scopes trial is available on the University of Minnesota Department of Law website, and its compelling stuff if you’re a student of American religious and philosophical history.

I also recommend a book I could barely put down, 40 Days and 40 Nights: Darwin, Intelligent Design, God, Oxycontin®, and Other Oddities on Trial in Pennsylvania (2009), by Matthew Chapman, great-great-grandson of Charles Darwin, the discoverer of species evolution by natural selection. It is not about the Scopes trial but about a 21st-century trial that turned on roughly the same philosophical disputes. In the trial—Kitzmiller v. Dover School District—parents opposed the district’s decision to promote Bible-based “Intelligent Design” in their children’s public school science classes, including in the teaching of evolution.

Presiding over the trial was U.S. District Judge John E. Jones III, who ultimately ruled that “Intelligent Design” was religious ideology, not science, and could not be taught as science. He also lambasted the defense for dishonestly misrepresenting their real aim (to bring Christianity into the curricuilum) as improving education.

When plaintiffs’ attorney Patrick Gillen pointed out to Judge Jones at the end of the trial that it had taken 40 days and 40 nights, he asked if the judge had done it “on purpose.” Jones replied with a clever pun:

“Mr. Gillen, that is an interesting coincidence, but it was not by design.”

See, Scopes is the gift that keeps on giving.