In a unique commencement address at historically black, all-male Morehouse College in Atlanta, Georgia, on Sunday morning, May 19, Robert F. Smith pledged to eliminate all student loans of the 400 graduates that day.

But it was something else he said in the speech that was arguably even more important, if not nearly as exciting: “Greatness is born out of the grind. Embrace the grind.” 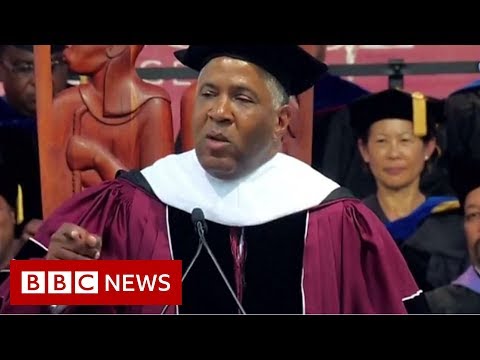 This post does not address its usual topic, religious nonbelief, nor is it political, another occasional topic, although the parameters of American education are inherently political. It’s about emphasizing something uplifting and something essential: generosity and the critical value of hard, relentless work in achieving success.

To my way of thinking, every venue and every time is the right one to spotlight those kinds of essential virtues.

All kids ‘pretty much the same’

In addressing graduates at Morehouse’s commencement ceremony, Smith, a black billionaire investor and philanthropist, stressed the importance of caring elementary-school teachers in his eventual success in business. His educators taught at Carson Elementary, a high-performing, predominantly white school in Denver, Colorado, to which he was shuttled daily on bus No. 13.

“Those five years drastically changed the trajectory of my life,” Smith said, according to a Washington Post report. “The teachers at Carson were extraordinary. They embraced me and challenged me to think critically and start to move toward my full potential. I, in turn, came to realize at a young age that the white kids and the black kids, the Jewish kids and the one Asian kid were all pretty much the same.”

Fittingly, only after stressing the overarching importance of “grit” and determination in achieving success did he drop the more entertaining bombshell: “My family is going to create a grant to eliminate your student loans!”

The audience of mostly students and parents lapsed into a moment of stunned, uncomprehending silence “before erupting in cheers and shouts of disbelief,” the Post reported. Morehouse President David A. Thomas, who learned about the gift at the exact moment that everyone in the audience did, described the scene:

“There was amazement in the room, people’s mouths dropped open. Students were looking at each other like, ‘What did he say?’ Parents hopped up to hug each other.”

According some estimates, the Post reported, Smith’s gift could amount to roughly $10 million, considering students’ tuition, room and board, and other expenses total about $48,000 per year, Thomas said.

Emphasizing the crucial importance of a college degree, which Smith described as “one of the most elite credential America has to offer,” he added that reaching that pinnacle is also one of “the greatest and most impressive” accomplishments in an individual’s life.

“But success has many parents,” he continued. “And as hard as each of you has worked to achieve what you all have achieved today, you’ve had a lot of help along the way. We are the products of a community, a village, a team.”

Still, success of any kind requires supreme individual effort, he pointed out, noting that before he made his own fortune in private equity markets he worked as a chemical engineer spending “pretty much every waking hour in windowless labs doing the work that helped me become an expert in my field.”

That labor was the foundation of his success, he said:

“Only after I put in the time to develop this expertise and the discipline of the scientific process that I was able to apply my knowledge beyond the lab.”

As people continue to spend billions trying to win “the lottery,” it’s important to point out once again that true, earned success is not short and easy but long and arduous. But the potential  payoffs in self-respect and achievement — and sometimes wealth — are worth the “grind.”

Smith, the chairman and CEO of Vista Equity Partners, has heretofore been notable for his resolute avoidance of publicity.