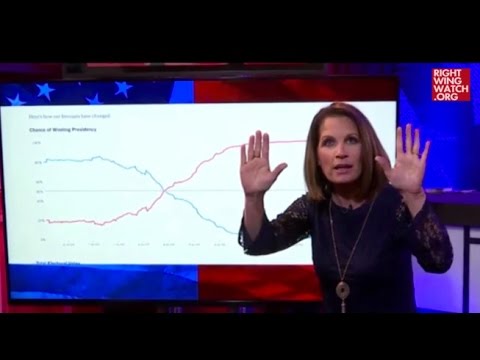 Bachman, whom I’m still embarrassed to say was once a candidate for president of our secular republic, last month once again opined, on the evangelical “Stand in the Gap” radio program, that Donald Trump was, literally, sent by God to save America.

That such nonsense-spewing extremist Christians are being taken seriously by anyone in America, even religious people, is cause for alarm and acute alertness.

Bachmann, who is known among the Christian Right as “pastor to the United Nations,” according to progressive news medium Right Wing Watch, said this on the radio program:

“We have never seen a president under more attack, more undeserved attack, but I think it’s because, again, of the day that we live in, the deception that we live in, and the demonic presence of so many evil things in our society. He deserves our prayers. He needs our prayers. And, again, God will answer those prayers. He answered those prayers before for us and we need to not just sit back because he’s done godly things, we need to be very active and lift up his arms [just as] Arron and Miriam lifted up Moses’ arms. This is the fellow that God has made our president. He’s not only leading us in the United States to the greatest level of prosperity, to the greatest level of blessing toward Israel—he’s put us on a path of blessing like no other president ever has—but because of the times we live in, we need him more than ever to listen to godly counsel, which he has. He has some of the most godly people surrounding him that I have ever seen, so he is deserving of that level of prayer and support and we need to provide that for him.”

Although generally reasonable people know this is unmitigated, unverifiable hogwash, just a modicum of research shows there’s a lot of people, even influential ones, who actually agree with her wholeheartedly. Just listen to Jerry Falwell Jr. and Franklin Graham—the offspring of pioneering, mega-influential televangelists—if you doubt it. (Watch the embedded video here to see what passes for sane political analysis among evangelicals.)

My main question for Mrs. Bachmann is: What are the “godly things” Mr. Trump has supposedly done for anyone, much less the American people? Forcibly separating immigrant asylum seekers from their children at our southern border, I’m guessing isn’t one of them. Or sexually assaulting women, cheating business associates, obstructing justice, coddling foreign dictators, lying—oh, the lying!—or constantly, hypocritically treating people exactly how he himself hates to be treated, which is to say cruelly, disrespectfully and dismissively. Oh, or the racism, xenophobia and misogyny. Not to mention the potty mouth.

If this is what passes for godly in this nation, Satan suddenly seems almost cuddly in comparison.

I’m not holding my breath.