Given the way Republicans have repeatedly condemned Rep. Ilhan Omar for being anti-Semitic by pointing to sloppy phrasing or tweets and casting them in the worst possible light, you would think they’d be up in arms over what Donald Trump said this weekend to the Israeli American Council.

If you’re keeping a list, he blatantly said they “don’t love Israel enough” and proclaimed that they had to vote for him or else they’d lose their money. 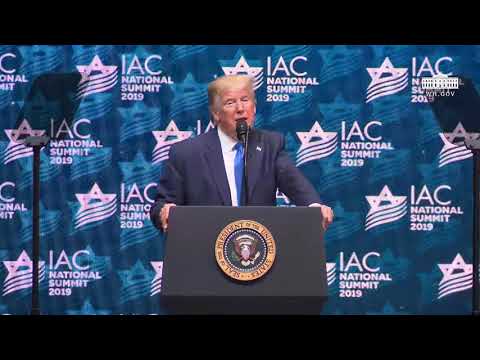 In his 45-minute speech to an audience of more than 4,300, the president criticized American Jews who, he said, were not sufficiently supportive of the Jewish state.

“You have people — Jewish people — and they are great people and they don’t love Israel enough,” he said.

The comments were reminiscent of remarks he made in August when he said that Jews who vote for Democrats were disloyal, drawing a vociferous backlash.

“You’re not going to vote for the wealth tax,” he went on. “Let’s take 100 percent of your wealth away. No, no. Even if you don’t like me — and some of you don’t; some of you, I don’t like at all, actually — and you’re going to be my biggest supporters because you’ll be out of business in about 15 minutes.”

No one, of course, is proposing a tax of 100% on wealthy people. (Sen. Elizabeth Warren has proposed a policy to tax the wealthy an addition $0.02 per dollar for every additional dollar they make after $50 million.)

But since Trump lying is no longer newsworthy to people, let’s talk about the anti-Semitic tropes. The idea of disloyal Jews is indeed as old as Judaism itself. It didn’t originate with Trump, but he’s a fan of the language, and it has extremely dangerous consequences.

American Jews are, by and large, supportive of Israel’s right to exist. But that doesn’t mean supporting everything the nation does as a whole. There are many legitimate reasons to be critical of Israel’s politics, particularly when it comes to Israel’s occupation of Syria, which has resulted in the deaths of countless civilians.

What Trump (or Mike Pence) choose not to admit is that the GOP’s support of Israel has little to do with protecting the Jewish people and far more to do with hastening the Second Coming, at which point, evangelicals believe Jews will be carted off to Hell.