Let’s say you really like the taste of Ben & Jerry’s Chunky Monkey ice cream — so much so that you seek the company of other Chunky Monkey fans to compare notes, and to celebrate the brand and the flavor. All is well for a while, until one day a friend offers you a taste of Bourbon Vanilla Bean Truffle ice cream from Häagen-Dazs. Its flavor and texture unexpectedly strike you as superior. When you tell the Ben & Jerry’s fans that you like another ice cream better, they erupt in pandemonium. They angrily flip you the bird on YouTube and tell you never to show yourself around them again. Some call your employer and complain that you are untrustworthy and of low morals.

A year later, you develop lactose intolerance, and swear off ice cream altogether. It just isn’t for you anymore, you conclude; you’ll be switching to Talenti Roman Raspberry sorbet. When news of your disloyalty gets out, the Häagen-Dazs fans join the Ben & Jerry’s ones in furious condemnation. They tell you that as a sorbet-eater, you’ve violated everything they stand for. Some even say you deserve to be killed, your partner raped, your dog gutted. “That’s what happens to dirty sorbet lickers,” they jeer.

Silly, right? But that’s literally Islam for you. If you’re a Muslim and one day you change or shed your religion, you have to be killed. Of course, not all followers of Islam believe that, but it’s not some fringe point of view either. In Egypt, more than 80 percent of Muslims support the death penalty for apostates. In Pakistan, well over 60 percent.

Which brings us to Pakistani-Australian Harris Sultan, author of the book The Curse of God — Why I Left Islam. Because Sultan, an atheist, isn’t in the closet, he angers Muslims far and wide, and he’s especially reviled by scores of Pakistanis who resent him for his religious “betrayal.” It comes as no surprise that Sultan (below) receives his share of threats, almost all of which are idle.

But some… we can’t be sure. Listen to this guy, a Punjabi man from Pakistan who now lives in the U.K., and who goes by Chacha Gamer on his YouTube channel. He says he’s been stalking Sultan and the women in Sultan’s family — mother, sister, and “white wife” — on social media, and he knows everything about them. 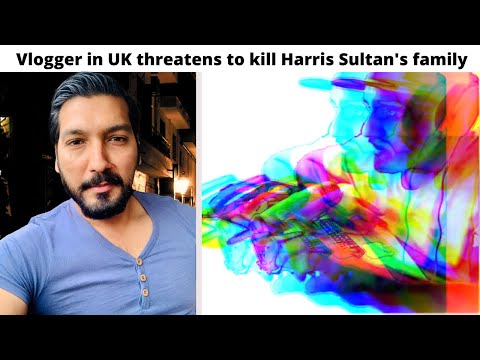 “Now I will slaughter them on live TV, in front of everyone. … And that little dog of his, Charlie.”

Followed by a picture of Charlie. And then a picture of what Chacha Gamer claims is Sultan’s home in Melbourne.

The wannabe assailant is somewhere in the U.K., and Sultan is in Australia. It’s not likely that the former will get on a 22-hour flight halfway around the world to assassinate the latter, so maybe that’s why he has a plan B:

“I’m going to get some people from Melbourne’s Islamic Committee and tell them what to do with him.”

It’s probably bluster — it’s not even clear what the “Islamic Committee” is — but Sultan has wisely notified the police. Chacha Gamer, meanwhile, switched all the videos on his YouTube channel to private, and took down his Facebook page. That’s obviously too light a consequence for making international terroristic threats. The U.K. isn’t Bangladesh. He ought to be arrested and held to account.

The same is true for one Haroon Malik, another British Muslim of Pakistani descent, who has made several videos threatening the rape and murder of Sultan’s female relatives.

“The time has come to blow myself up”.

Back in May,he was warned by the Lancashire police but it shows how seriously these terrorists take them.

“When I rape (Sultan’s sister), then I will say, ‘It’s freedom of dick, it’s my dick and I’ll shove it wherever I want.'”

Next, a warning to godless people in general.

“You atheists. You bloody atheists. You sons of donkeys. I’m still here. I haven’t gone anywhere. Now, what I’m going to do to you, it’s going to be a professional job, I won’t play with you. I’ve prepared my casket, now it’s time to blow myself up.”

Followed by more bragging about his (no doubt inadequate) penis, and where he plans to insert it.

What a charming faith.

Remember, these hate-filled pillocks aren’t living in a Lahore slum or in a hovel in Balochistan. They enjoy comfortable, thoroughly Western lives among democratic people in a live-and-let-live country that guarantees them the freedom to practice their faith. Why they can’t muster the basic decency to reciprocate, I’ll go to my grave not understanding.