Judge less, love more. That’s the message that the Rev. Chris Schuller, 55, wants to spread in a video aimed at asking tolerance for marijuana users.

“[T]hanking God for weed might feel a little awkward at first,” says the Rev. Chris Schuller — a former rector at St. Thomas’ Episcopal Church in the Snell Isle neighborhood [in St. Petersburg] — in the short video that’s punctuated with the reggae rhythms of Bob Marley. “Thanking God is going to feel so much better than throwing stones at people who are already stoned,” he says. 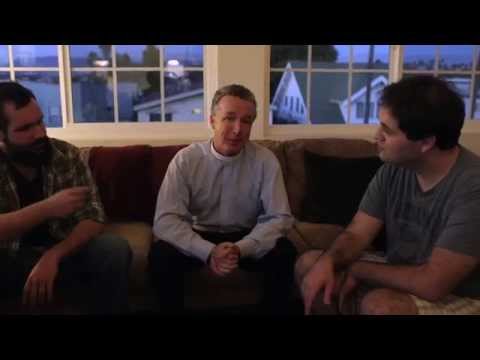 Bishop Dabney Smith, head of the Episcopal Diocese of Southwest Florida, is not amused, relaying via his spokesman that

“We need to think of how we present ourselves. And the clergy is held to a higher standard.”

Schuller couldn’t care less about what his superiors think: he’s announced plans — not yet in effect — to leave the Episcopal Church. His goal is to write

… movies and short scripts with a spiritual message,

of which the pro-pot video is just the first example.

More Schuller entertainment and life lessons will soon be available at the website he and a friend just launched together, called hashtaghallelujah.com (motto: “Make Faith Fun”).

The weed endorsement is, Schuller explains,

“… a message of faith resting in a fun visual context. One bit of art imitating life is that the Pastor Chris character in the video and I are both light drinkers and don’t use marijuana at all.”

“We’re just not going to get to that one love, if we judge our brothers and sisters on something as minor as how they relax on a Friday evening,” he says in the video. “So let’s practice non-judgment. Let’s go with gratitude and not attitude.”

Works for me. Light me up.