It isn’t known what grave sins the late Marco Gusmini may have committed. We can only surmise that the Almighty smote Gusmini for a reason — and we do know He did so in an impressively original way.

A man has been killed after a giant crucifix, erected in honor of the late Pope John Paul II, toppled on top of him. The 30-foot 600kg wood cross fell during a ceremony in northern Italian village Cevo, near Brescia, ahead of the pope’s canonization which is set for Sunday. It hit Marco Gusmini, who died instantly, and injured another man who has been hospitalized. The victim had been posing for photographs with a group of friends in front of the cross.

Gusmini is said to have been living in his home town of Lovere on a street named after Pope John XXIII, who will also be canonized on Sunday.

By the way, shouldn’t we have expected a better-constructed cross, considering that God’s son was the most famous carpenter who ever lived? Dave Foley reminds us that Jesus, as a craftsman, had his shortcomings: 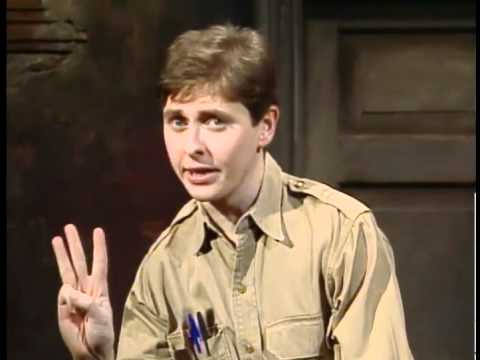