As a gay atheist, Joshua Todd had well and truly left the Christian church behind.

So why is he using his birthday to launch a GoFundMe to raise money for The Garden United Methodist Church?

Well, he believes in good works. With a career in social work that’s led him to become President and CEO of the Oregon youth organization Camp Fire Columbia and a history of outreach to young people, he doesn’t think you need God to make the world a better place… but he knows that people of God can be part of the project if they choose. Good works are good works.

In conversation with his sister, he found out that The Garden — the church where she attends services and volunteers — runs a food pantry for hungry residents of the East Little Creek area in Norfolk, Virginia. The pantry’s web page notes that one in five members of the local population lives in poverty, making food insecurity an important issue for community well-being.

So the food pantry is an important charitable mission that took a hit when the congregation split over a vote to affirm LGBTQ people and relationships.

The vote was part of a larger disagreement within the United Methodist Church as a whole, which likely would have led to a schism in May of this year if not for the intervention of COVID-19. Under said schism, the “traditionalist Methodist” splinter denomination would continue to reject LGBTQ equality, allowing a more progressive branch of the church would move towards ordination of LGBTQ clergy and the solemnization of same-sex marriages. (Just this week, a church in Georgia chose to split from the UMC in order to preserve its support of LGBTQ rights.)

The situation puts individual churches in the position of having to decide by vote which way to shift, meaning that LGBTQ parishioners are essentially watching their communities vote on their personal validity. In cases like The Garden’s, a split on the issue can lead to a massively reduced congregation… and, consequently, a dramatic reduction in funding for charitable programs like the food pantry.

Todd really values the conditions of this particular food pantry, which is set up to offer “a lot of dignity” for its food-insecure clientele. He makes the case for supporting The Garden’s work in a YouTube video and on the GoFundMe site itself: 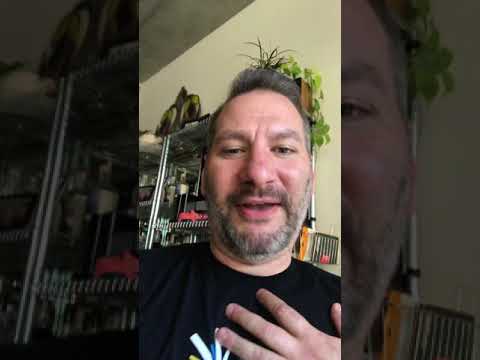 Why is a gay atheist from Portland raising money for his sister to support a church food pantry? Last year, my sister’s church (Garden United Methodist in Norfolk VA) made the decision to become a LGBTQI affirming parish and in doing so lost half their congregation because “love thy neighbor” apparently only means the straight ones.

Soooo, why do you care? Garden United happens to support a really rad, award-wining food pantry. No paperwork to prove you are “deserving” or “poor enough.” No pre-packed bags of food you might not like or be able to eat because of allergies… you know, because you should “be thankful for what you get.” No, this place is set up like a grocery store. Families and individuals can come as often as they need, and get what they need. With the loss of half their congregation they are struggling to keep the pantry stocked and honestly, while I don’t believe in God, I believe in the divinity of community and us helping each other get through these incredibly difficult times.

So I am asking my friends and community to give whatever you can to their efforts.

And times are difficult indeed. Just as the congregation’s resources dramatically diminished, the economic impact of the coronavirus pandemic has created a wave of need, with more people in and around Norfolk relying on charitable efforts like The Garden’s food pantry.

Todd understands the ways charities like food banks or food pantries can operate in ways that dehumanize, humiliate, and blame the poor, because he comes from a family that once relied on food pantries to nourish themselves. It makes The Garden’s careful, compassionate, and community-based approach all the more valuable to him, he explained on YouTube:

As a family who both had to go to food pantries growing up and at one point my parents had a bookstore that had a food pantry in it, we’ve been on both sides. So I was just really moved by what they are doing and as a gay man, even though I’m an atheist, I believe in the power and divinity of community and people coming together to support each other. And I love my sister, and I love the work they’re doing. And so I’m supporting her.

Todd’s sister works closely with the food pantry as a church volunteer; it will be her responsibility to use the donations he receives to keep the shelves stocked.

Todd started his birthday campaign with a goal of $1,500 to keep them going until Thanksgiving. But when he reached that goal just 48 hours into the campaign, he upped the ante to seek $6,000 — enough money to fund the food pantry project for an entire year.

Kudos to The Garden United Methodist Church for doing the right thing by both queer people and poor ones, and a very happy birthday to Joshua Todd.