The reading of the final vote was about as anti-climactic as possible. In the room, they celebrated with polite applause and mild cheers… not an eruption of curses against God (which is how I had imagined it). That’s okay, though. The votes were all that mattered and the results came in 64.8% to 35.1% in favor of repealing Ireland’s law criminalizing blasphemy. (You can read more details about the vote at that link.)

That’s 951,650 Irish voters who said people ought to be able to criticize religion without the threat of punishment. It’s also the second time this year that Irish citizens have essentially chosen, by a 2:1 margin, to walk away from conservative religious traditions.

The moment that the people of Ireland officially removed the crime of blasphemy from our constitution #BlasphemyRef pic.twitter.com/UDm2gM2ViP 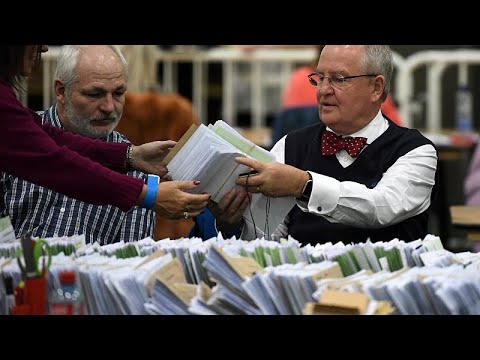 Atheist Ireland is the group that did so much work to get the referendum on the ballot and campaigned for the repeal. They celebrated with a measured response saying this historic vote “finally removed the medieval crime of blasphemy from our constitution.”

The two to one margin is a great result for freedom of religion, belief, and speech, and for Irish politics based on integrity instead of nods and winks.

We have finally removed a medieval crime, that was added to our constitution in 1937, and crowbarred into our statute books a decade ago.

We now look forward to the Government passing the new Bill, that it already published, to remove the offence from the Defamation Act and the Censorship Act.

Our laws can then protect people from harm, not protect ideas from criticism, and our media outlets will no longer have to self censor themselves.

Ireland was once a Catholic country. Today it is a pluralist country, which still has Catholic laws that we are gradually changing.

The Irish people are better off without the looming presence of the Catholic Church and all its policies over their heads.

This is only the first of many fights that remain regarding church/state separation. As Atheist Ireland chairperson Michael Nugent noted, the group will continue working to lessen the control the Church has over public schools along with changing the by-default religious oath taken by the president. But what an incredible victory for them.

Unlike so many big victories by church/state advocates in the U.S., this wasn’t the result of a legal decision. They convinced the people to join them in their campaign. That sort of response makes it very difficult for conservatives to pin the blame on a small group of “activists” or call for a reversal in any meaningful way. The Church and other religious conservatives just have to accept that criticism of their beliefs is now fair game and that even symbolic threats can’t be used to silence opponents.